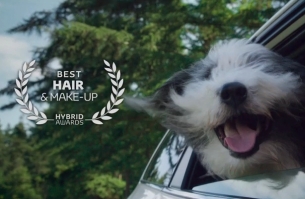 Toyota and Saatchi & Saatchi London have launched a series of idents as part of their ongoing sponsorship of ITV Movies, to promote the new Toyota Auris Hybrid.

Designed to celebrate real life situations that should be rewarded but are normally taken for granted, each ident focuses on a different award category.

In "best foreign language film", two teenage girls in the back seat of the car conduct a rapid-fire conversation in ‘teenspeak’, while a dad looks on, thoroughly bemused.

In "best hair & make-up", a long-haired dog embraces the windswept look by joyously hanging out of the window of the car.

Meanwhile, a red-haired, spirited and energetic child keeps himself amused by making chicken noises and growling like a monster to win the "best animated short" award.

Rob Potts, ECD at Saatchi & Saatchi London: "Cars and movies have always made for an exciting combination. In these idents we've gone one further and made the passengers watchable as well."

Jemma Shaw, Marketing Communications Specialist at Toyota (GB) plc: “This fun series of idents give the audience a preview into real life scenarios which I think the majority of people will relate to. The new idents also do a great job of showing off the new Auris Hybrid which launches this summer.”