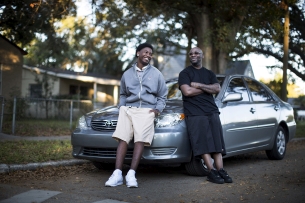 In a new series of documentary shorts, Toyota has partnered with three award-winning Getty Images Reportage photojournalists to explore driving as a major rite of passage through the experiences of three families in Los Angeles, Boston and St. Petersburg. The series is part of TeenDrive365, Toyota’s comprehensive teen safety initiative that helps parents and teens become safer drivers together.

In the video shorts, a teenager’s new driver’s license represents different things for each family. You can view the videos here.

Captured by award-winning documentary maker and photographer, Shaul Schwarz and filmed in Boston, the Rabinowitz family’s story highlights the excitement - and the tension - that can accompany this rite of passage. Teenager Erez is eager to get his license, while his parents are more reflective, hoping that he will not text and drive as they both do. This milestone is especially complicated for Erez’s father, who survived a life-altering car crash as a child that badly injured his parents.

Ben Lowy follows the Vaught family’s story - poignantly exploring the ways in which teenage daughter Chloe’s new license helps her parents begin to view her as an adult, such as when she drives her mother to her grandmother’s funeral. This documentary was captured in Los Angeles.