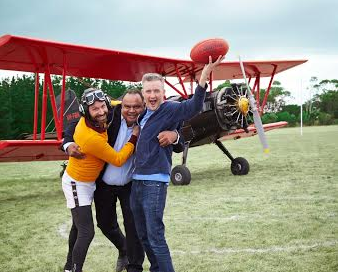 Toyota has launched the latest iteration of its long-running Legendary Moments campaign with yet another comic recreation of a memorable moment from AFL’s rich history.

Joining the likes of Alex Jesaulenko and Tony ‘Plugger’ Lockett as legends immortalised in the series is Essendon speedster Michael Long and his epic dash down the wing in the 1993 Grand Final against Carlton.

Created by Gemba, the 2015 campaign leverages the irreverent sense of humour and iconic characters established more than 10 years ago by Mojo Melbourne. Steve Curry and Dave Lawson are back as the obsessed AFL fans, as their brand of comic content is rolled out in an extended social media campaign to kick start a new AFL season.

In the extended TVC that launched during the Essendon v Carlton AFL Round Three match on Saturday, Long recreates his flying run around the MCG by bouncing a football from the wing of a vintage bi-plane as it speeds across a country football ground, proving he’s still got the skills that made him famous in the all-conquering Baby Bombers of ‘93.

Fans have jumped onto the legendary moment and spread it far and wide via their social networks throughout the weekend. The execution is part of a comprehensive content series, which sees Steve and Dave tease fans as to who might be the ‘Next Legend’, as well as deliver unique behind the scenes content, quizzes, outtakes and flashbacks.

"Legendary Moments is one of the longest-running and most-loved sponsorship campaigns in Australian sport and it’s great to reignite the series with an inspirational character such as Michael Long, a man who has proven himself a legend both on and off the field," said Nic Lloyd, Toyota Australia’s sponsorship events and promotions manager.

This is the 13th ad in the series for Toyota and the first to be created entirely by Gemba, although the company has been involved strategically from day one. More recently, Gemba has taken the Steve & Dave characters into AFL-related consumer promotions and deeper into Toyota’s social media landscape.

“Steve and Dave really strike a chord with fans, and their timeless take on Legendary Moments is still relevant in this changing media landscape,” said Boyd Hicklin, executive creative director at Gemba. “Full credit must go to Mojo for putting the puzzle together all those years ago, to the boys at The Pound for delivering the comedy and to Toyota for having the conviction to support a great idea for the long haul. It’s become very a powerful asset of its own.”

Gemba worked hand in hand with Toyota’s agency partners to deliver the creative across multiple channels; One Green Bean for social media strategy and execution, The Media Store for media strategy and negotiation, Oakton for digital execution - website and mobile.