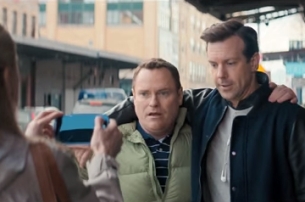 As part of AT&T’s sponsorship of Tribeca Film Festival, the brand has created a new ad designed to drive attendance and generate excitement as part of their “Film for All” campaign.

This year, the festival sponsored by AT&T will kick off with a screening from SNL. The ad, created by BBDO NY, deliberately features actor and well-known former SNL cast member Jason Sudeikis with the premise that there is a film lover in all of us.

The ad is now running on YouTube and will run in theaters prior to every screening at the Tribeca Film Festival, starting April 15th and ending April 26th.

Cut downs of the ad will run on Taxi TV, mobile pre-roll, elevator TV, and on charging stations at Tribeca Film Festival events. The campaign will also include print, OOH, digital and social support to show how AT&T is connecting more people to the power of film and provide information for how New Yorkers can get tickets to Film For All Friday, a one day event that offers free tickets to the public.