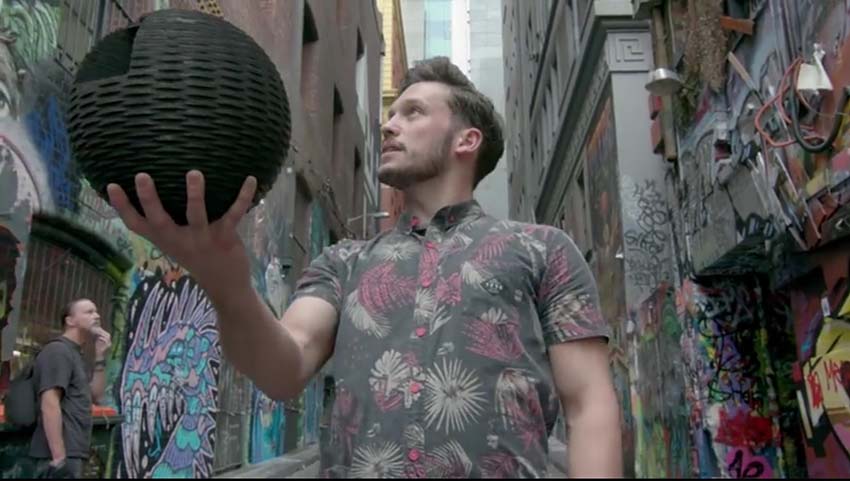 Following on from the success of the ground-breaking, award-winning Remote Control Tourist, the new Play Melbourne Live games are another world first. The games use a ball embedded with a smartphone, designed to be passed around by Melburnians while streaming live footage of the city via Periscope.
Tourism Victoria has turned the city of Melbourne into a giant playing field. The people of Melbourne are its' players and the rules of the game are to keep the ball moving through Melbourne's eclectic streetscapes, engaging with interesting people and capturing the city's stories.

Play Melbourne Live will roll out a series of games throughout December and January, hosted by local Melbourne Periscope star, Adam Cinemre. He will take viewers behind the scenes at some of Melbourne's most iconic and unusual landmarks, including exclusive access to the Andy Warhol/Ai Weiwei exhibition at the NGV and The Australian Open.

As Periscope is a two-way platform, it will let the audience ask questions in real time and help guide the game play towards where, who and what they would like to see in Melbourne. The reactions of Melburnians as they pass the ball around and share their unscripted, candid insights into the world's most liveable city will make Play Melbourne Live another landmark Tourism Victoria campaign.

This is the final phase of Tourism Victoria's five-year Play Melbourne campaign, which has helped evolve Melbourne into the country's most popular city break destination providing compelling new reasons for locals and tourists to re-engage with the city.

Nick Foa, Tourism Victoria's Chief Executive Officer, said the campaign is reflective of the city's reputation as a creative leader and early adopter of new technologies.

"Melbourne's creativity and innovation is equal to the great cities of the world. This can be witnessed through its people, places, neighbourhoods and events."

"The Play Melbourne concept seeks to overcome Australia's perception of over-familiarity with Melbourne by challenging curiosity, while at the same time providing global audiences with a taste of the cultural and creative heartbeat of the city," said Foa.

The Play Melbourne Live ball contains a Periscope/video enabled phone and is housed inside a sustainable and light cork structure, designed by the coincidentally-named, Studio Periscope. An open-source template for the ball is freely available online, allowing other cities across the globe to join Melbourne's game.

Clemenger BBDO Melbourne Interactive Creative Director Ben Keenan says the ball has effectively been given an Access All Areas pass: "Periscope gives us a nimble way to show people anywhere in the world some of the most interesting, hidden and normally restricted areas in Melbourne."

"The ball itself is a work of art and creates intrigue amongst all who see it - not unlike Melbourne itself. Play Melbourne Live is a first for the tourism industry and we're so excited for Tourism Victoria," he said.