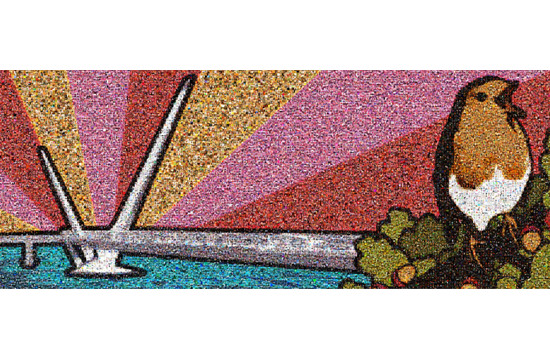 Publicis London created a unique Facebook app for the Tourism Ireland global pages that invited users submit portraits to create a real life piece of artwork. The finished piece will be located in the heart of the city centre near Market Street, along the trail of the historic city walls to celebrate Derry≈Londonderry being UK City of Culture 2013.  It will be revealed on 19th December  by Mayor of Londonderry, Martin Reilly. The ‘Culture Wall’ was launched to create an epic new piece of wall art, that brought people together from around the world to create a lasting legacy together.

The Publicis London team invited the city’s local artists to create designs and Domnall Starkie, a young up and coming artist with a passion for the city and a strong graphic pop art style, shone through, creating the winning design.  Having built a reputation in Northern Ireland for work providing social commentary in a contemporary, graphic style, Starkie’s winning piece symbolises Derry-Londonderry’s future as a cultural hub.

The team used it to build a Facebook app that invited people to add their picture and help compose a giant online mosaic.  Users uploaded their pic and it was instantaneously added to the mosaic. Over time artist Domnal Starkie’s iconic image gradually built up and began to come together.  There was an incredibly overwhelming response and over 27,000 people submitted their portraits exceeding all expectations. The mosaic had to be rebuilt three times to accommodate the queue of people keen to submit their image thus enabling agency creatives to take this online image, made up of thousands of faces and print a real life artwork on an 18m wall in the centre of Derry≈Londonderry. The art aimed to create an attraction for everyone that got involved, so they could visit the city and see themselves on the wall, and feel part of the legacy in years to come.

Publicis will launch an updated version of the Facebook app this week where people can see the real life artwork, watch videos about the artist and project, and book their trip to go see it for themselves. Everyone who submitted a picture will receive an e-zine inviting them to visit the city to see themselves in the ‘Culture Wall.’

Jason Cobbold, Publicis London Deputy Managing Director says : “We believe in leading change and this is about what brands do rather than just what they say. Putting this campaign into the real world shows this commitment.

"This idea is an example of how old media and new technology can combine in arresting new ways.  The digital reach and immediacy of Facebook allows a community of people to participate in something real and permanent.  Pixels convert to bricks.”

Niall Gibbons, chief executive of Tourism Ireland, said: “This unique piece of wall art has been a great way to allow everyone near and far to take part in this year’s City of Culture celebrations and will provide a wonderful legacy of the year. Local artist, Domnall Starkie has managed to encapsulate in this artwork all that is vibrant, young and exciting about the city, and will encourage many more visitors to the city in 2014 and beyond.