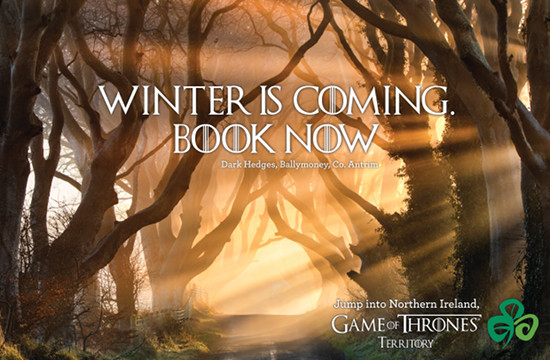 Tourism Ireland is using dramatic landscapes of Northern Ireland that feature in the hit HBO series Game of Thrones to tempt fans of the series to consider a visit to the country.

Publicis London has created a global social media campaign that will run across Facebook and Twitter during the new series of Game of Thrones, which airs in the US and other countries from 6 April.

The campaign, which launches with teaser executions from 2nd April, will encourage social discussion among fans of Game of Thrones to increase consideration of Northern Ireland as a travel destination.

Twitter creative will be served to fans from @DISCOVERIRELAND using Game of Thrones keyword targeting and to viewers who enter Game of Thrones-themed Twitter searches.

The ads subvert traditional tourism campaigns and feature locations in Northern Ireland which are used in the series. They sit alongside the line “Jump into Northern Ireland, Game of Thrones Territory.”

The Facebook element of the campaign will target Games of Thrones enthusiasts on new episode days through promoted page posts.

The creative drives to a dedicated page on Ireland.com where fans can find out more about the real locations in Northern Ireland where the series is filmed.

Activity will run for 12 weeks in GB, US, France, Germany, Canada, Italy, the Nordics, the Netherlands and Spain.

Carat is handling media planning and buying for the campaign.

“Tourism Ireland is excited to be working closely with HBO to promote the upcoming Season 4 of the hit show Game of Thrones. This is an outstanding opportunity to showcase Northern Ireland’s beautiful and dramatic scenery whilst connecting with the passionate audience of one of the biggest TV shows in the world," said Brian Twomey, Head of Marketing Communications, Tourism Ireland.

“The background scenery to Game of Thrones is as dramatic as it is beautiful.  But this is no fictional setting.  You can experience it for real in Northern Ireland.  Our campaign celebrates the beauty of the country, with a typical Game of Thrones twist," added Jason Cobbold, Deputy Managing Director, Publicis London.