Platform to allow advertisers & publishers to connect with consumers in over 60,000 social venues 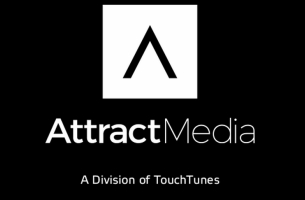 TouchTunes, the largest in-venue interactive music and entertainment network in North America, announced today the launch of Attract Media, a new digital out-of-home activation platform for advertisers and publishers to connect with millennial consumers in over 60,000 social venues nationwide. The announcement is the next step in the company’s evolution to create an unprecedented level of interaction between brands and consumers.

“The digital out-of-home category is a fast-growing market as it provides advertisers with highly compelling, interactive formats to engage consumers,” said Jim Wilson, Chief Operating Officer at TouchTunes. “With Attract Media, we are transforming the way marketers can leverage digital screens in-venue as an activation platform by integrating mobile, social, proximity, and other technologies.”

Attract Media also recently partnered with Universal Pictures to promote the film “Fifty Shades of Grey.” Using Attract Media’s screens, consumers across the country could view the film’s trailer, swipe through an interactive photo gallery, and play music from the soundtrack in-venue. Other advertisers have included Coors Light and Jack Daniel's Tennessee Honey.

“We’re proud to open up our platform’s massive footprint not only to digital advertisers, but also to publishers eager to drive incremental utility, engagement and revenue streams.” explained Mike Coppola, Vice President of Media & Advertising at TouchTunes. “To date we have engaged with top tier publishers like Thrillist Media Group, Foursquare and The Chive to connect their content to our valuable audience.”

Advertising demand for Attract Media’s capabilities continues to grow from buyers including WPP’s Kinetic, who accesses Attract Media’s inventory directly, as well as programmatically through its exchange.

“Attract Media’s TV initiative is what the market is looking for – video alongside compelling content in a millennial-rich environment,” said Mike Gamaroff, Head of Innovation at Kinetic Worldwide. “We’re excited to continue our partnership with them and engage more interactively with a growing audience.”