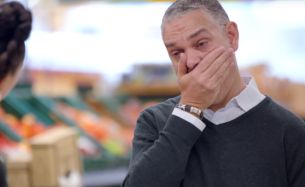 Tesco and BBH have created a campaign which aims to help the nation’s fathers get some much needed acknowledgement this Father’s Day. The film, produced by BBH’s in-house production studio, Black Sheep Studios, shows what happens when people are given an opportunity to express their feelings for the father figure in their life. As each individual unsuspecting father went about their usual supermarket visit in specific Tesco stores, the public address systems began to play some pre-recorded messages of appreciation from their children. Their reactions of surprise, delight and genuine emotion were all captured on film.

The campaign comprises social, online and TV activity. The film launched on Facebook to Tesco targeted audiences and will run on TV from Friday 17th June. Online, the audience are directed to helpful ways in which they can show their acknowledgement and appreciation for their own dads, such as a simple calendar reminder, recipe ideas and Tesco’s range of gifts.