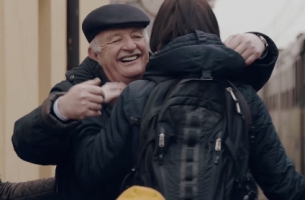 This year marks 25 years of freedom from communist rule for Poland. To celebrate the anniversary, Prima coffee (a Polish brand established in the new free market) and FCB Warsaw have created an opportunity for people to give back to the silent heroes who helped them in their time of need.

Over 30 million aid parcels packed with everyday essentials were sent by anonymous donors to help during harsh rationing: the packages recognized by the scent of the coffee hidden inside. Prima and FCB researched the people and organizations involved, connecting stories so families could meet and thank their benefactors. Launching the campaign were the stories of wrestler Andrzej Wroński who met the Swiss man who donated the shoes that started him on his journey to become a double Olympic champion; the sweater sent from France that became a family heirloom; and a girl who learned Italian so she could write back to the letters she found in the parcels.

A special digital platform has been created, so everyone can share their own touching story from those times and as well as send a “thank you parcel” to repay past kindnesses with a symbolic gesture and a pack of Prima coffee. So far during the campaign period, web traffic to Prima’s website has increased 4100% and over 5,000 stories have been shared.