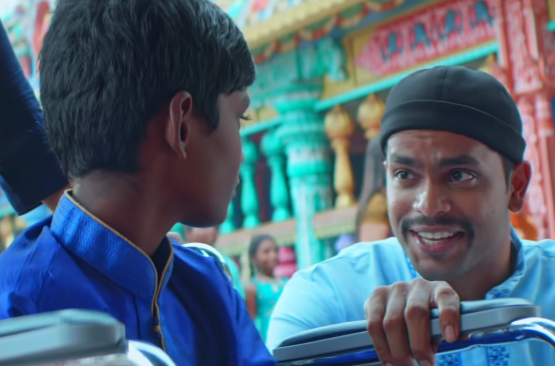 Created by FCB Kuala Lumpur, 'Strength to Rise' is the tenth campaign in RHB Bank’s Challenger Series, and it commemorates the upcoming Diwali festivities. This edition sees the brand’s challenger spirit manifested in Dr Muraly Arumugam, who is the founder of Tamilan Uthavum Karangkal (Malaysia Tamilan Helping Hands), a 700-strong organisation of volunteers that has been enabling disabled worshippers to pray at the summit of Batu Caves by carrying them up the 272 steps of the iconic holy site.

Dr Muraly’s life journey is one that’s paved with mistakes, regret and redemption. Over 20 years ago, while he was at the lowest point in his life, Dr Muraly did something truly remarkable to redeem himself. Upon seeing a wheelchair-bound worshipper at the foot of Batu Caves, he rallied his friends and together, they carried the trader up to the peak of the staircase – a feat of true strength and kindness that brought pride to his father and reconciliation within his family.

In the film, Dr Muraly’s noble act of carrying a disabled worshipper up the steps of Batu Caves intentionally draws parallel to his true zero-to-hero story, where in order to turn over a new leaf, he had to make the difficult climb from the bottom of the society barrel to arrive at the summit of redemption.

On the resonance of the film with the RHB brand, Abdul Sani Abdul Murad, chief marketing officer at RHB Group, said: “It is tempting to give in to despair when society has seemingly left you behind. But at RHB, we believe that true progress is about always finding the strength to rise above past failures. For Dr Muraly, his challenger spirit not only turned him to a life of selflessness, but also sparked those around him to join his cause. This makes him the epitome of the 'Together We Progress' belief that RHB stands for, and we are very honoured to tell his story.”

Wang Ie Tjer, FCB’s creative director, explained why Dr Muraly’s tale was chosen among countless personal tales of progress: “The moment the team discovered Dr Muraly’s tale, we knew we had come upon something truly profound – a hopeful tale that uplifts the neglected and challenges society’s views on those we deem irredeemable.”

“Hope, redemption, second chances – it’s easy to think that they have no place in reality – as things that are only possible in movies,” Ong Shi Ping, FCB’s co-owner and chief creative officer, added. “Dr Muraly’s tale has shown us that together, we have the strength to uplift our fellow man and redefine society into one that is inclusive, daring, and hopeful. Now, isn’t that more exciting than any fiction?”

Since it was launched on 4th October across RHB’s social media channels, the campaign has already gained 4.4 million views and 42,000 positive reactions, a result that is currently unmatched by any other RHB film.