'Total War WARHAMMER': The Story of Tsarina Katarin in the Eyes of Platige Image

In the newest edition of the game, each choice a player makes will shape the reality-shattering conflict to come 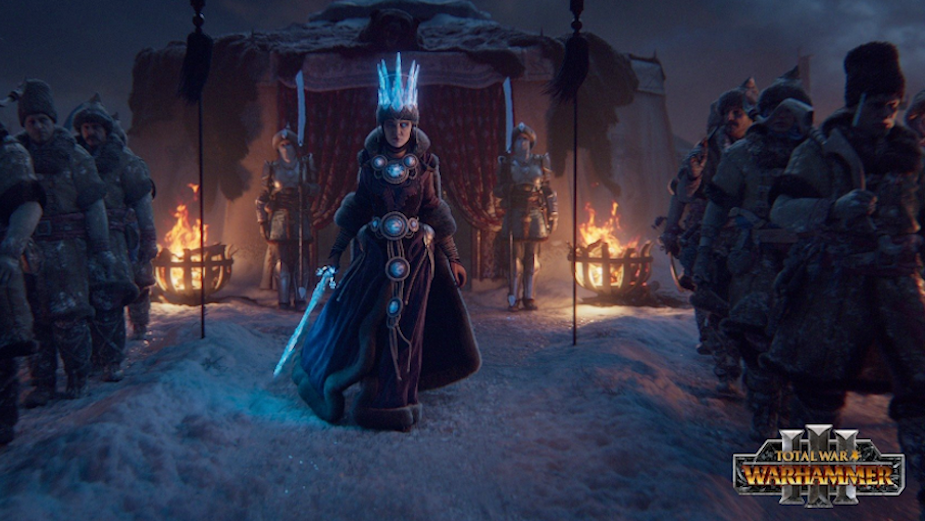 On 3rd February, the premiere trailer of 'Total War: WARHAMMER III' was released. The video was created by Platige Image for Creative Assembly. The assumptions and challenges of the creative process are discussed by the artists associated with the studio - Jakub Jabłoński, the director and art director of the project, and Marina Borokhova, CG producer.

In 'Total War: WARHAMMER III', each choice you make will shape the reality-shattering conflict to come; from the mysterious 'Lands of the East' to the daemon-infested 'Realms of Chaos'. Experience strategy gaming on a scale yet unseen in this epic culmination to the 'Total War: WARHAMMER' trilogy.

Featuring iconic new races from the world of 'Warhammer Fantasy Battles' - including the video-game debut of 'Kislev' and 'Cathay' alongside the factions of 'Chaos – Khorne', 'Nurgle', 'Slaanesh' and 'Tzeentch' - players will wage war with the most diverse array of legendary heroes, gargantuan monsters, flying creatures and magical powers that the series has ever seen.

“Our vision, from the start, was to create a series that felt like an incredible journey through this world we all loved.,” said game director, Ian Roxburgh. “The enormous support of our players in ensuring the success of the first two instalments has pushed our ambition to new heights, and we can’t wait for everyone to experience it.”

“First, we always have to respect the legacy of the creators of 'Total War: WARHAMMER' and the vision of the customer, Creative Assembly. Millions of fans know every character of this universe and we must attempt to fulfil their expectations when bringing those heroes and monsters to life.” said Jakub. “The video is our tribute to the fans of 'WARHAMMER' and the 'Total War' series. It is also an attempt to present a strong female character from this universe. Katarin is not an ordinary warrior princess; she is the proud Tsarina and an adept of ice magic. We wanted this change and awakening to be tangible in the video. We aimed at showing the growing courage and might that will make her kick the butts of the entire enemy army.”

For the purpose of the cinematic, 16 character models and their variants as well as seven environments and over 30 props were created. Nearly the entire animation - apart from monster close-ups - was based on motion capture recordings. The creators spent two days on the mocap set working on the animations for Katarin, the Kislev soldiers and the Chaos army. To make the director's work easier, they used real time preview, which made it possible to see the 3D scene immediately at the set.

“We tried to use as many elements from the game's world as possible and to appropriately place them in the video." said Marina Borokhova, producer. "The events in the trailer fluently move from Katarin’s comfortable tent to the vast battlefield where two powerful armies are engaged in battle. The biggest challenge was the combination of various locations so that the seemingly different spaces and light situations created a unified image for the audience.”
Jakub added: “The most difficult aspect of the project turned out to be the lighting for the army, arranged in such a way that it would show the fantastic atmosphere of 'Total War: WARHAMMER', a bit of realism, and light piercing the layer of falling snow. In the real world, we would probably be unable to see much during such weather and at this time of the day. Another challenge was the near-intimate introduction of Katarin to the internal world of the Dominion of Chaos, where we showed the four iconic deities of the 'Total War: WARHAMMER' universe.”
This is the third large trailer created by Platige Image for Creative Assembly and the 'Total War: WARHAMMER' series. In connection with this cooperation, the artists from the studio created a number of smaller cut-scenes and small productions. The creators highlight the fact that the work on the animations created in the 'WARHAMMER' universe is a return to their favourite hobby - exploring the universe created by Games Workshop and the Total War series of games.
view more - Creative