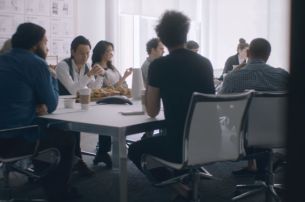 The Jack Russell Agency is an independent creative agency that officially opened its doors in early 2016. Founded by Don Saynor and Ali Dalfen, both 20 year veterans of multinational agencies, their vision is to create real work for real people.

Jack Russell's Chief Creative Officer Don Saynor was exhausted by the traditional, slow and antiquated agency model. Along with his partner, Ali Dalfen, they knew the only way to thrive in this changing industry was to start from scratch and build a new platform to meet clients needs. "We took everything we knew from our big agency experience and tried to replicate it better, faster, and more efficiently. Unfettered by the committee mentality of a large shop, on our most recent campaign, we were able to go from a germ of an idea to a global campaign in 8 weeks," he said.

To illustrate the agencies core values, Jack Russell has released a film satirising a situation we’re all too familiar with in the boardroom. Saynor states, “We believe in using creativity to solve business problems, we just don't believe in all the crap that happens in between. Certainly we may piss off the big guys, but we wanted to show why we’re different. We're tenacious, nimble, and accountable and we're not afraid to tell the world. Hell, if if we can't sell ourselves, would you really want us to sell you?”

Dalfen adds, “Now that we have the ability to execute an idea quickly and the resources to do it on a tight budget, we figured we'd have some fun while getting our message out there, it was a bit cathartic in a way.”

JRA’s mandate is to ‘Make things real people love.’ Saynor explains, “Our agency is comprised of creative thinkers, be that planners, producers, writers, art directors and account managers. We are a tight group of curious problem solvers creating work that builds business by engaging real people, not just industry award show attendees. While, we’d certainly be happy to win a Gold Lion, making things that speak to and engage actual humans, is our focus.”

The Jack Russell agency plans to stay a tight crew ensuring that each member of the team brings value to the table. Since each project can be so different, they'll rely on their network of experts to collaborate when needed. Dalfen suggests, "Otherwise we might have a team member giving their opinion when it isn’t relevant and only contributing to the balance sheet."

Evidently, the film is Jack Russell’s promise to their clients, “we can't make a shameless self promotion video boasting about our more efficient business model and not be committed to following through." JRA's strategy is based on one simple promise which makes it easy to put all their energy into sticking to that promise. "We aren't bogged down by too many conflicting point of views from CEO, CCO, CD, ECD's. The creative process doesn't need to be complicated when the team knows our core values.”

As more clients are starting to work with agencies on project based work, The Jack Russell Agency still sees value in clients committing to a long term relationship, “there always needs to be continuity with creative work and a deeper understanding of your brand. We want to build and maintain a high level of trust with our clients, it is a key factor for long term success.”

The Jack Russell Agency plans to officially announce their US and Canadian clients in the coming months.