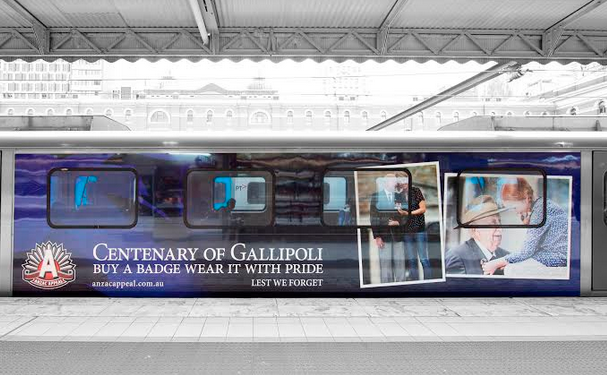 The new campaign will appear across Melbourne metropolitan trains in the lead up to ANZAC Day, beginning April 13th.

The train wrap decal promotes the ANZAC Appeal, an initiative by the RSL to raise money for returned servicemen by selling badges. The badges are in the shape of the iconic Rising Sun emblem which has been used for years by Australia’s armed services.

The campaign has been designed to communicate with hard-to-reach commuters, to remind them of the importance of the centenary date. TorchMedia and Metro Trains are providing the media space for the momentous day, with the train campaign running for two weeks.

“For almost 100 years, the ANZAC Appeal has been raising funds for Australian servicemen and women when they are in need,” Smith explained. “It’s important we ensure the spirit of the ANZACs stays as strong for the next 100 years, and beyond. People can lend a hand and show their support by buying an ANZAC badge and wearing it with pride or donating online at www.anzacappeal.com.au.”

Kirsty Dollisson, general manager of TorchMedia, said that Media consumption habits are changing and we’re seeing a shift away from traditional TV and print advertising. Out-of-Home is going from strength to strength benefiting from this shift, providing an ideal channel to spread the word about the ANZAC Appeal. TorchMedia is proud to support such a worthy cause.