Top Directors Showcase Their Work at the 56th Regielounge

Awards and Events 548 Add to collection 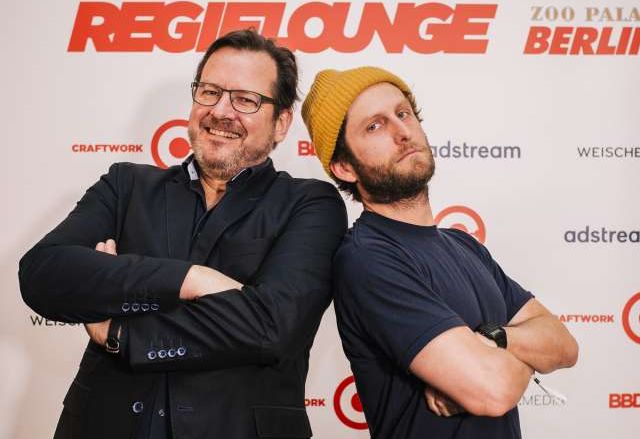 This year's Regielounge, organised by BBDO for its 56th year, has come to a conclusion with more than 700 guests attending. Six international film directors accepted the invitation from Steffen Gentis, initiator of the Directors Lounge and BBDO's head of film production, and presented highlights of their work.

The introduction film demonstrated how movies and cinema ads create a unique experience for the viewer. The demo spot was composed and produced by the Studio Funk subsidiary label 'kids in a candy store' in the new Studio Funk Berlin studios.

The first show reel was presented by US director Erik van Wyke, who now lives in Berlin. He specialises in creating impressive emotional ads for clients such as BMW, Smart, Nike, Converse, Kleenex, Camel Active and Patagonia. In his commercials van Wyke seamlessly combines elements from the worlds of sport, fashion and lifestyle.

Host Steffen Gentis then welcomed Outsider director Max Fisher. Fisher made a name for himself as a documentary filmmaker before switching to the advertising film industry. Since then he has produced numerous ads for companies such as Nike, Sky, Microsoft and Puma.

A further guest was Hamlet Berlin's Elena Petitti di Roreto. The films by the Italian artist are characterised by distinctive aesthetics in the use of detail, light and image composition. As a former editor, she succeeds in producing films which relate multi-layered, imaginative stories. Di Roreto has directed films for Valentino, Etro, Cos and Vogue Italia. She is also the co-founder of Melany, a directing duo based in Milan and London which specialises in fashion films and artistic projects.

Steffen Gentis welcomed Jared Knecht, who works for production company BWGTBLD. A self-taught filmmaker, he relocated to New York and moved up quickly through the ranks. Recently Knecht has directed spots for Toyota, Adidas, Rimowa and Google.

A further highlight was the presentation by Marco Kreuzpaintner in collaboration with Soup Films. The up-and-coming German star showed extracts from 'Beat', his first series and first work for Amazon. Guests also saw a trailer for his latest work, the movie 'Der Fall Collini' ('The Collini Affair'), which is due to premiere in German cinemas in April this year.

Another of Steffen Gentis's guests was commercial director Markus Walter of Markenfilm. A resident of Berlin and Los Angeles, Walter began by making music videos before turning his attention to advertising spots. His work for clients such as Nike, Mercedes-Benz, EA Sports, Ikea, Nintendo, Hewlett-Packard, VW, Audi and Sony has brought him numerous awards at the Clios, LIA, New York Festivals and Cannes Lions.

Björn Hoven, managing director of the Leuchtstoff.Media, presented the initiative 'Leuchtspuren' ('Tracers'), which was financed by WerbeWeischler and is aimed at promoting the medium of cinema. This moving picture format centres on a number of prominent actors and filmmakers, such as Iris Berben, Anna Maria Mühe and Simon Verhoeven. In a series of brief video clips they tell of their personal experiences in the movie industry and reveal those films which have had a particular impact on their careers. At the Directors Lounge, Björn Hoven was accompanied by the actors Robert Hoffmann and Lea van Acken, both of whom declared their personal affection for the cinema. The interviews have been featured nationwide in the cinema commercial block for the past year.

The Directors Lounge in the Zoo Palast was followed by networking at the after show Party in the 'concept space' in the neighbouring Bikini House, where pop culture agency Ozmoze presented a live music act featuring British-born artist Ren.

The next Directors Lounge will take place in Düsseldorf on November 21st and – for the first time – will be held together with the ADC Digital Experience in the Capitol Theater.