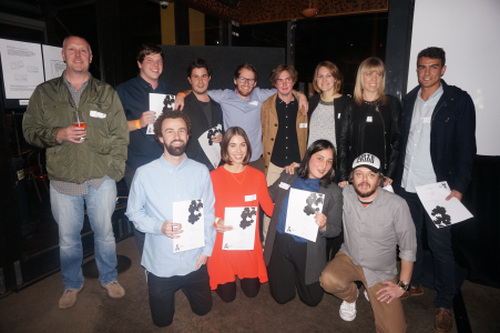 More than 200 industry professionals and graduates attended the AWARD School Graduation ceremony at the Loft in Sydney last night to celebrate some of Australia’s freshest new creative talent.

The top 10 graduates from the 2014 class of 102 students were announced, with Alex Schieder taking the award for top student, followed by Jack Colley who was awarded second, and Callan Mckean in third. The remaining top ten students, in no particular order, include:

AWARD Chairman Mark Harricks welcomed the graduates into the industry and shared his own experience of life after AWARD School. He said: “Being a creative in advertising is an incredibly rewarding and fulfilling vocation. You will experience some of the highest highs and the lowest lows. My advice is: work hard. It means you will always push yourself further. Pick your battles and try to see things from the other side. And ultimately, enjoy yourself. When you’re having fun, you produce better work. There is so much outstanding work in this year’s showcase. I look forward to seeing the next big ideas out in the industry.”

NSW AWARD School Head Joe Hawkins congratulated the students and thanked the participating agencies, tutors, guest speakers and judges for their support. He said: “"Ability, Ambition and Attitude."  Steve Coll said it when he lectured, and I can't think of three better qualities that an aspiring creative has to have.  The ability of the students was clearly evident with the work displayed on the wall, and the fact that they graduated showed ambition.  The attitude part was up to them, and hopefully they'll all display a measured confidence with spades of humility.  Then again, it was an open bar, so I'm not sure what sort of attitudes were reflected on the night.”