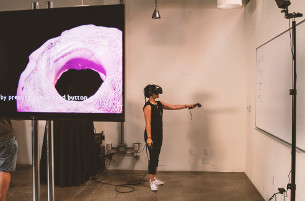 Interactive production company Tool recently hosted their first-ever VR showcase, where Dustin Callif, Managing Partner, Digital, and Julia Sourikoff, recently appointed Head of VR & 360, and their team featured a series of VR premieres and demos from renowned VR and interactive artists and directors. Those artists and directors included Isaac Cohen, aka “Cabbibo,” and George Michael Brower, who are driving innovation in the medium and redefining immersive storytelling through technology.

Cabbibo debuted his HTC Vive headset experience, “My Lil’ Donut,” as an invitation to users to build relationships with spatial objects in VR. A toy for people to play, connect and empathize with a digital life form within the headset, the experience allows users to create a simulation where every twist, wrinkle and edge of the “donut” is made using physics; where the “donut” moves simultaneously with the users’ movements, rather than waiting for the creator to lead each and every move.

“Unlike other VR content creation tools that focus on giving the creator complete control, ‘My Lil’ Donut’ aims to create a medium that is more of a manifestation of the relationship between creator and material, rather than being all user generated,” Cabbibo said. “Much like Latte Art, where the physical properties of the medium are as important as the ego of the creator, this project is an experience that brings organic creation to a currently static virtual world.”

“The concept of the VR showcase was to create a platform where our artists could share new work, spark conversation within the VR community, and ultimately push the medium forward,” said Callif. “It’s important that our company and our community at large continue to invest in these type of initiatives.”

“People connect with Cabbibo’s work because it inspires us to play, explore, and create,” said Sourikoff. “The visceral nature of VR experiences like ‘My Lil’ Donut’ demonstrates how realistic the virtual world can feel when we can interact with it in a believable way. As a company, we’re excited to push the boundaries of responsive and human-centered design for VR, and we think these kinds of experiments will help shape new approaches to content creation for the medium.”

The “My Lil’Donut” experience is available here. After users create their “donuts,” they can export the objects through a 3D rendering software such as Maya, Cinema4D or Blender, or via 3D printing, to bring their digital creation to life.