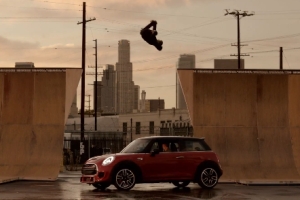 In a global campaign for the launch of the new MINI John Cooper Works, Sausalito-based agency BSSP has created the ultimate product demo juxtaposing the car’s spins and moves against those of legendary skateboarder Tony Hawk. Hawk performs a side-by-side pas de deux with professional rally car driver Guerlain Chicherit, as each shows off a variety of stunts.

“To launch the most powerful MINI yet, we wanted to create a spot that appealed to gearheads and adrenaline junkies alike,” explained Steve Mapp, creative director at BSSP and the director of the spot. “So, working with Tony Hawk and Guerlain Chicherit seemed like a perfect fit. And like MINI itself, both athletes are celebrated for their own originality and style.” The spot concludes with an epic shot of Hawk spinning a 540 above the MINI John Cooper Works, as the car revolves rapidly on the ground.

The team, along with the guys at 900 Films, also shot a behind-the-scenes video, which includes commentary by Tony Hawk and Guerlain Chicherit. In it, Hawk, a MINI owner and fan, notes that the new car has the same kind of maneuverability as a skateboard, giving it high praise for drivability, performance and speed.