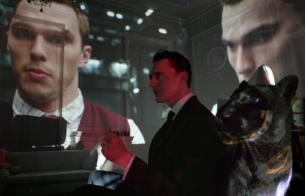 Jaguar, the luxury automotive manufacturer, launches its multi-media, global campaign in the UK with the next chapter of the Good to be Bad campaign showcasing the newly launched Jaguar XE.  The 60-second commercial “Master Plan” will break first in the Champions League match final on Saturday 6 June, 2015 to air on Sky Sports1 and ITV1.

Ian Armstrong, Global Head of Advertising at Jaguar comments, “Having recently been awarded with a Global EFFIE for our ‘Good to be Bad’ campaign, we are set to reveal the next chapter to launch the new XE – arguably Jaguar’s most significant model ever.”

Tom Hiddleston reprises his role as a British Villain who now appears to have stepped into the shoes of the mastermind in the control room as, with a backdrop of a world of uniform silver and grey saloon cars, he declares, “It’s time for a change, a new plan, needs a new boss…” and he orders the Jaguars to be unleashed on an unsuspecting world.  Nicholas Hoult, currently in British cinemas for the reboot of Mad Max, makes an appearance as the team’s Boffin scientist who agrees: “It’s time for a new animal…with the same potent DNA, but even more ruthlessly efficient..”, and releases the new Jaguar XEs, to emerge from the secret underground London lair and start to replace the ubiquitous silver boxes. Partnering again with the Oscar-winning team of Tom Hooper, director and composer Alexandre Desplat with another original music score, Tom Hiddleston ends the ad with the now-famous line, “Oh yes!  It is good to be bad”.

Spark44, Jaguar’s strategic, lead creative agency, devised and created the campaign which will feature on TV, Cinema, VOD, print including press and OOH, and mobile and digital formats.  In a media plan booked and bought through Mindshare, it will run globally across 21 markets from June through to 2016. A campaign with Sky AdSmart will tailor the same creative to Jaguar Retailers throughout the UK and will feature the voice of Mark Strong who also starred in the original Good to be Bad TV campaign “Rendezvous” which launched at Super Bowl 2014.

Simon Binns, Managing Director, Spark44 says, “The Jaguar brand is on a roll at the moment and the new work reflects that confidence. The campaign builds on the success of the last two years, moves the plot forwards and introduces the dynamic Jaguar XE.”

Martin Cox and John Sutcliffe, Global Creative Directors at Spark44 add, “What more could we ask for? An Oscar-winning director, two great British actors, filming on the Bond stage at Pinewood and across London, then recording the soundtrack at Abbey Road with an Oscar-winning composer.  It’s a privilege to work with such incredible talent creating a global campaign for a car as important as the new Jaguar XE.”