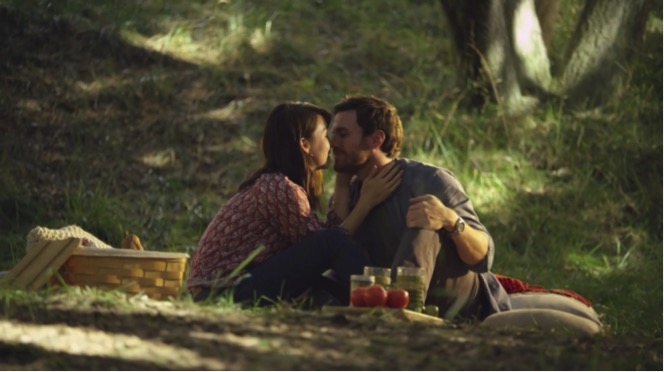 Director Tom De Nolf and digital studio Reel FX, Dallas/Santa Monica, offer a fresh perspective on being in love in the charming new :60 “Hit the Road” for Kay Jewelers, out of Stern Advertising, Inc. The spot, directed by frequent Reel FX collaborator Tom De Nolf, features a myriad of couples equally immersed in their friendships as their romantic love for each other, sharing both everyday and poignant moments while forming a deep everlasting bond. Executive Producer Steve Johnson produced the shoot for Reel FX. In “Hit the Road”, we see a vibrant young couple enjoying a picnic in the park, a family of four enjoying a cozy movie night at home, a sleepy couple enduring a lovable daily blanket struggle and an older pair comforting each other through a somber moment. The spot debuts the jeweler’s exquisite Ever Us Two-Stone Diamond Ring via the young man proposing to his girlfriend while enjoying their afternoon in the park, touting, “One diamond for your best friend. One diamond for your true love. One ring forever.”

De Nolf has been directing spots for nearly two decades with his production company, DeNolf Films, working with the biggest names in the industry, including Disney, Honda, Nike, McDonalds, Ford, AT&T, Procter and Gamble, FedEx, Southwest Airlines and Hewlett Packard, to name a few. He has collaborated with top talent such as Robin Williams, Annette Bening, Ed Harris, Jerry Jones, Talking Heads, Michael Phelps and Quentin Tarantino. His work has received numerous industry accolades including Best of Show, multiple Gold Awards and a prestigious AICP Award with his Polaroid “Burglars” film being in a permanent collection in the Museum of Modern Art in New York City.