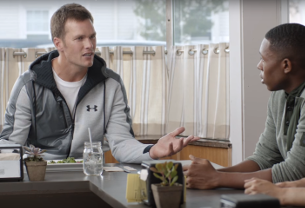 To celebrate the five-year anniversary of The Week of Greatness, Foot Locker is debuting this week three new spots featuring a trio of greats from the worlds of sports and music.  Each one provides his own take on various aspects of greatness.  For example:

Tom Brady, arguably the greatest quarterback of all time, laments the fact that perpetual greatness often leads to excessive scrutiny.

NBA superstar Carmelo Anthony discovers that perceived greatness is relative and that some critics will never be satisfied.

Grammy-nominated and multi-platinum rapper Ja Rule expresses admiration for the Week of Greatness’ sustained success while doling out well-earned wisdom on the fleeting nature of greatness.

Together, these three spots form a campaign that not only celebrates the return of The Week of Greatness at Foot Locker, but also provides a unique and humorous perspective on greatness itself. Created by BBDO New York, Foot Locker’s creative agency, they are the latest iteration of Foot Locker’s ongoing “Foot Locker. Approved." campaign.