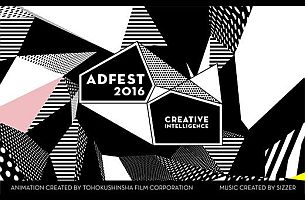 With just days to wait before ADFEST 2016 gets underway in Thailand, ADFEST is pleased to unveil this year’s animation created by Tohokushinsha Film Corporation in Tokyo together with Sizzer Amsterdam.

The film was directed by Shinichi Yamamoto from Omnibus Japan, which is Tohokushinsha's in-house digital production house.

Yamamoto says: “I was inspired by the polyhedron graphic created by Design Army in Washington DC to bring the theme of ADFEST 2016, “Creative Intelligence”, to life. I developed and located this mass and closed object, which symbolizes the brain, to express space around us and created a world that spreads outside with design elements: a closed world in the polyhedron graphic and an outer world around us.

“The concept gives a feeling of equivalent connection between the two inner and outer worlds. When we began working with Sizzer Amsterdam, we agreed the music should be bright electro POP with some humor rather than serious.”

While refining the animation, Tohokushinsha Film Corporation began working with Sizzer in Amsterdam, which was responsible for composing the soundtrack.

Sizzer’s Marcel Alexander Wiebenga, lead music supervisor on this project says: “The visuals created by Yamamoto are so frenetic and fast paced, so obviously we needed to create a soundtrack that matches the energy of the animation itself. It was a really great and satisfying collaborative process working with Tohokushinsha Film Corporation, we’re really pleased with the end result.”

Tohokushinsha Film Corporation has been operating since 1961. The company sits at the forefront of great technological and creative evolutions with four major business divisions: Media Production, Distribution, Broadcasting and Commercial Film Production.

Sizzer is a music agency based on the canals of Amsterdam. It works with a network of established composers and offbeat artists, combining experience with creativity. The company is driven by an inherent desire to create a unique sound for each brand.

Their animation will feature prominently at ADFEST 2016, which kicks off this Wednesday and runs from 16th to 19th March at the Royal Cliff Hotels Group. Book your Delegate Passes via www.ADFEST.com