Toddler-voiced Adults Launch 'A Day of Play' with DDB California 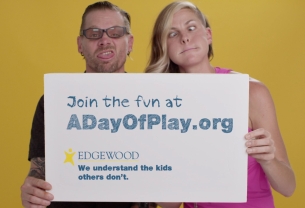 DDB California, part of Omnicom, has teamed up with Edgewood Center for Children and Families, a non-profit organization serving approximately 7,000 children and families, to put on “A Day of Play” on October 17th. Edgewood’s first-ever one-day event in San Francisco will give kids dealing with depression, mental, and behavioral health issues a day of childhood fun they’ll never forget. “A Day of Play” will take over Golden Gate Park’s Sharon Meadow with free activities like mini soccer, kickball, bounce houses, Giant Jenga, yoga, face painting, and much more.

“We know that participation in physical activities and play brings a positive change in the lives of children affected by mental illness,” explained Jim Oswald, Director of Marketing and Communications at Edgewood Center for Children and Families. “We hope to de-stigmatize mental health which is why we’re so excited to partner with DDB to create A Day of Play that is designed to offer all kids a safe place to freely express themselves, raise their self-esteem, and most importantly, have FUN!.”

In addition to the event itself, DDB California created two PSA videos - “Helicopter” launched on September 22nd and “Slime in my Bed,” is slated to next week. The videos feature adults letting out their inner children, inviting viewers to do the same and donate to this worthy cause. The agency also partnered with Ted Perez to develop ADayOfPlay.org, a microsite where people can learn more about the event, make a donation, and join in on the fun.

Todd Grantham, President and CEO of DDB California, commented, “When you get the opportunity to do something good for kids who really need our help, how can you say no? We thoroughly enjoyed producing this work for Edgewood. For all who watch it or participate in the actual day, we hope it generates lots of good feelings, a smile or two and hopefully more than a few donations. Because these kids really should know what it’s like to just be a kid for a day. Something many of us take for granted.”