Today You, Tomorrow Me: How Chris Neal Adapted a Timeless Parable for a Timely Film

The Great Guns director talks the meaning of transactional love, capturing authenticity, and chasing that last bit of sun for his pertinent Good Samaritan short 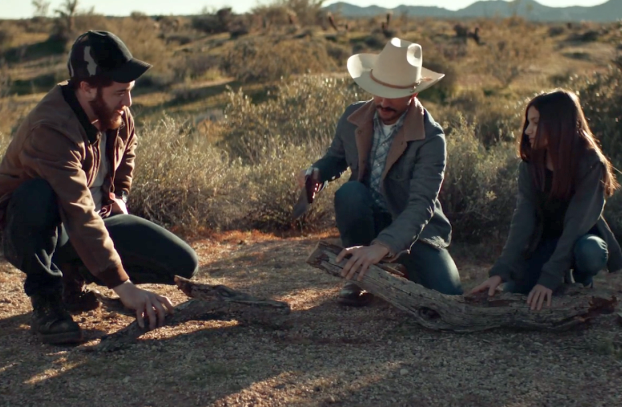 When considering the modern-day allusions of the enduring ‘Love Thy Neighbour’ parable, you wouldn’t expect inspiration to come from an unassuming comment on the internet. But, back in 2010, Great Guns director Chris Neal discovered just that. Browsing the internet, he stumbled upon a Reddit thread asking users if anyone had ever picked up a hitchhiker. One response, from a user called rhoner, detailed why he always chooses to help those in need, telling the story of how a Hispanic family once came to his aid when his car broke down. The story was had great impact, with over 7,500 upvotes on the site and a follow-up article on The New York Times. Chris too was struck by the comment and has, ever since, wanted to bring the story to life. 10 years later, ‘Today You, Tomorrow Me’ was born.

After Chris showed the first cut of the short to Great Guns EP Thom Fennessey and founder Laura Gregory, they were taken aback by just how timely and resonant the story was. Enthusiastic to help finish it, the two took the cut to the Ad Council in New York – who had recently extended the run of R/GA and Great Guns’ previous Love Has No Labels short from David Nutter, ‘RISING’. ‘Today You, Tomorrow Me’ was very much in keeping with the Love Has No Labels message – a movement that promotes acceptance and inclusion of all people across race, religion, sexual orientation, age, and ability. The Ad Council embraced the film and helped spread its message through the organisation and campaign social channels.

Here, director Chris Neal explains why he found rhoner’s story so impactful, how he found the perfect cast for the film, and how he proves that – despite all our differences – we really aren’t so different.

Q> What inspired you to tell this version of the ‘love thy neighbour’ story?
Chris Neal> I was inspired by an internet comment that blew up back in 2010. I had that comments saved and would regularly go back to it – I’ve always wanted to bring it to life. I love the depth and brilliance of this ‘good Samaritan’ style parable. It’s timeless and it challenges the idea of ‘who is my neighbour?’ in both a convicting but inspiring way. It breathes life and desire to care for others in an authentic way because of the human spark over anything else.
Q> Did you make a conscious decision to mirror the two families in the film? Was it a key consideration to underline just how similar we all are?
Chris> I wanted to mirror the family dynamic and also directly mirror the fathers themselves. They are both blue-collar, hardworking guys. The both drive Ford trucks. Even their attitude and ‘machismo’ is similar. The Hispanic father is an ideal version of who Mark wants to become. Mark sees him there for his family; he’s strong, courageous, and shows a deep honest care for others. Ultimately, I think it convinces and motivates him to become that type of father to his daughter and husband to his wife from such an unlikely interaction.
Even with the music, I wanted to drive the mirroring of the interaction. I used an acoustic guitar for Mark and a charango for the family to score most of the project. They start out on opposite sides – left and right – and slowly, throughout the film, they intertwine and eventually crossover.

Q> There’s a notable focus on the power of exchanges in the film such as money, food, and tools. Why did you choose to highlight such an action?
Chris> I loved the intimacy and connection that comes from sharing. With the $20 specifically, I wanted to showcase this ‘transactional love’ that we all seem to live out – ‘I’ll help you if you help me’. Even in Mark’s conversation with his ex-wife, he’s trying to buy his family’s love. I love that the Hispanic family turns down any attempt to pay them back. You can’t trade or buy real love, it’s a gift that’s hard to come by. Transactional love is everywhere, but I think deep down we all desire a love that has no strings attached.
Q> What was the casting process like?
Chris> Nailing the Hispanic family was really difficult. I found Elizabeth (the mother) first, she was amazing. After reaching out everywhere, I finally stumbled across Christopher (the father) on Instagram. I reached out directly, and his read was incredible. Finally, I found Andrea (Maria) though a friend’s younger sister that spoke fluent Spanish. She had no acting experience, but she was incredible and did such an amazing job on her first film.
I worked closely with Alex House (Mark) to really create a space for Andrea to feel comfortable. At times we even pretended to be on a break, while Alex and Andrea would chat about life (while we kept rolling) to catch really authentic interactions between them. Alex was a key piece in collaborating and helping me create intimate moments with all the characters.

Q> Did you come across any production challenges? How did you work to overcome them?
Chris> Because it was lower budget, I handled all the art (such as vehicles and props). In hindsight, it was way too much to have on my plate! We had to get all these trucks up to North Phoenix as well as all our gear and crew. Everyone was pitching in for multiple roles to really help lighten the load. JP Summers (our DP) was driving one prop truck all week, Chris Weatherly (producer) was driving the Bronco, and Cam Trejo (EP) was wrangling the rest of the crew and gear out in the desert daily.
Chasing the sun was the last difficult piece. We shot over three days, so framing the right scenes in that golden hour was so key and we couldn’t waste time. Once the sun set behind the mountain, we were done for the day and couldn’t capture anything else. The last day, JP did an amazing job getting coverage during golden hour. He was moving around like a mad man using every second to capture moments in perfect light!
view more - Trends and Insight

INSPIRED BY: Justin Horner aka 'rhoner'