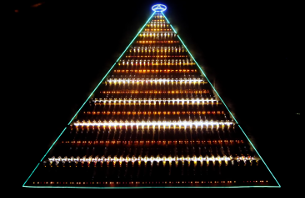 An enormous effort has brought Mercedes-Benz's new campaign to life. “The biggest Christmas tree in the world”, created by Brazilian independent ad agency TODAY, shows truck drivers that they can accomplish incredible things, including establishing a new world record recognised by the Guinness Book of World Records.

A team from the British publication went down to Brazil to check the live action which involved dozens of truck drives that aligned 350 trucks in order to form the image of an enormous Christmas tree. LED bulbs and wires helped provide the effect captured by the lenses of several cameras, including one placed in a drone and gave the tree a better look.

The ad shows drivers conducting their trucks without revealing exactly what was happening and where they were going to. Gradually, the effects expand the picture and reveal the incredible image of the new World Record Christmas tree.

"We've asked TODAY to create a Christmas ad campaign as huge as the importance of truck drivers work in Brazil”, said Claudia Campos, a senior marketing executive of the company in Brazil.

“We want to praise truck drivers, as they are a professional category that corresponds to a greater of the driving forces of the Brazilian economy, while strengthening the connection between them and Mercedes-Benz Trucks brand. A long and hard working 72 hours process of preparation and recording led us to create this stunning ad campaign”, said Elisa Gorgatti, an executive creative director (ECD) at Today ad agency.

The campaign was brought to life in a terrace from a Mercedes-Benz Trucks dealer in Mauá, near São Paulo, the biggest city in Brazil.