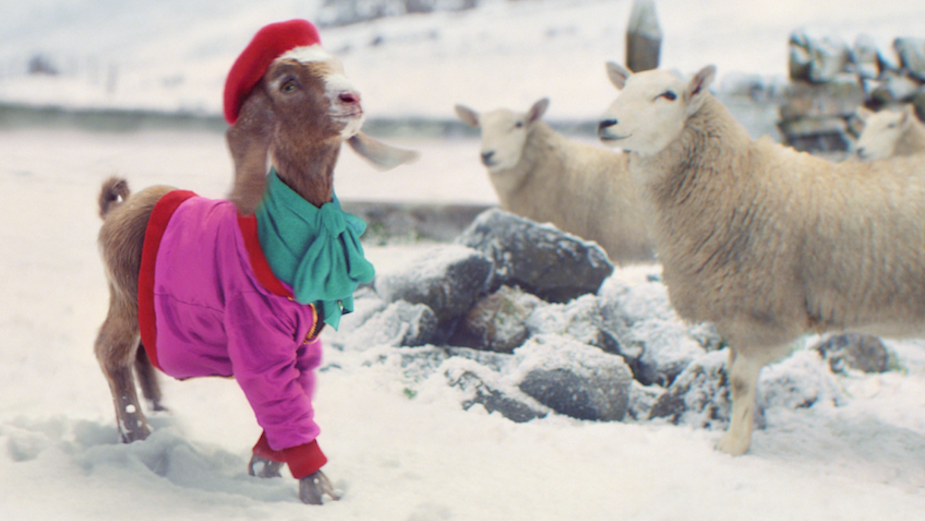 TK Maxx has today launched its 2020 Christmas campaign, acknowledging the year we’ve had and shining a spotlight on the tender and joyful act of making everyone feel special this Christmas.

Created by Wieden+Kennedy London and directed by Matthijs van Heijningen, the ad will air in six European countries and will launch on TV in the UK on the 4th November. For the first time ever, and to ensure crew numbers were kept to a minimum, all shots and takes of the ad were live streamed to the creative team and TJX Europe via QTake technology. The ad was shot in Biggar, Scotland.

The 30 second spot in the UK is voiced by esteemed British actor and voice of TK Maxx ads for the past four years, Bill Nighy. The infectious ad soundtrack - The Game Remix – is from Gabriel Garzon Montano, feat. Junglepussy, Seb remix.

Viewers are immediately greeted by campaign protagonist Lil’ Goat in the opening shot, her farmer owners watching on as she struts across the snowy landscape to the beat, decked from head-to-toe in an enviably stylish designer outfit. When Susan questions Gary, “Did you buy the goat a designer outfit?” Gary, instead of conforming to the stoic farmer type, looks on tenderly with a tear in his eye and replies, replies proudly, “Yes, she’s had such a hard year. She bloomin’ well deserves it if you ask me”.

The ad draws to a close with the jubilant goat sliding freely across the icy terrain, embodying the off-price retailer’s spirited and often humorous nature to deliver an important message - after the year we’ve had, everyone deserves to feel special this Christmas.

Deborah Dolce, group brand and marketing director at TK Maxx comments: “We wanted to recognise the difficult year that we've all had and at the same time offer a bit of joyful optimism. This charming ad is a playful reminder that the gift of giving is really special and can bring such sweet pleasure to all.

"We have hundreds of local stores across the country, plus TKMaxx.com, and we are placing a great emphasis on two simple things this Christmas, safety for our shoppers & staff plus an amazing selection of unique gifts at really affordable prices. We think everyone deserves something carefully picked with love, this year of all years."

Hollie Walker and Cal Al-Jorani, creative directors at Wieden+Kennedy, comment: "It’s been a year. But that won’t stop us making this Christmas as special as possible for the ones we love. That’s the message we wanted to bring to life with the tale of our farmers and their sassy lil’ goat. A strutting symbol of hope that aims to bring a little festive joy this season."

The Christmas campaign will run in the UK, Ireland, Germany, Poland, Austria and the Netherlands, combining ATL with print, digital, social and PR to create a fully festive, integrated, through-the-line campaign.

The campaign creative, TVC production and digital assets have been created by Wieden+Kennedy London. Ogilvy is the PR and influence agency and Mindshare is the media agency. The in-store and social creative will be delivered by TK Maxx’s in-house Creative Team.