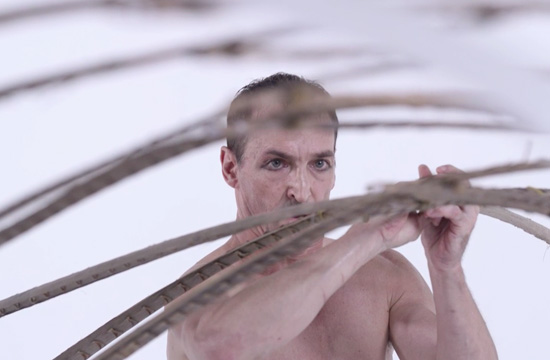 The new Edge collection from Titan is the sleekest yet avatar of the award winning Edge series. Made with space-age Titanium, the 'slimmest watch in the universe' is now also feather light – the culmination of a series of design evolutions over nearly a decade. The communication brief to the agency was to highlight this very aspect – a watch specifically evolved to encapsulate mastery in all its aspects.

The creative idea was to lend a human association to the watch – one that stands for lightness, precision, skill and elemental simplicity. The long search eventually led to Swiss balance artiste, Maedir Eugster.  Eugster's incredible act of kinetic sculpting soon became the perfect metaphor for the mastery that goes into a Titan Edge.

Joono Simon, Executive Creative Director, Ogilvy South: It was important for us to recognise that the line between art and commercial art is blurring. As we aim to create new brand conversations, the quality of our audience's interaction entirely depends on the quality of experiences we can offer.

Titan's new collection is designed to represent elegant modernism at its sharpest. The TV commercial itself is a unique act that perfectly captures both, its craftsmanship and minimalist design.

A fair amount of dramatic lighting, deep breathing, and plenty of showmanship of unbelievable balancing from Swiss performer Maedir Eugster is the highlight of the latest TVC from Titan Edge. In this truly unique commercial, Maedir Eugster, a world-renowned master of balance, truly justifies the mastery involved in creating Edge timepieces.

Performing against a white canvas, Maedir Eugster carefully assembles bare palm frond spines along with a feather by balancing each piece over the other. He carefully rests the feather on a small branch and then grabs another slightly larger spine and balances each proceeding one on the tip of the next, until he’s holding a massive kinetic sculpture overhead. This amazing act reflects upon the mastery of the Titan Edge timepiece that is a work of art in itself.

It is breathtaking to see how Eugster masters in building a temporary sculpture, based on a single feather which denotes the uniqueness and sense of mastery that exists in the latest Edge timepieces.

More than just a simple test of stability, Maedir rightly depicts a visually mesmerizing look that justifies the ideology of Titan Edge, which is “Mastery beyond belief” in the TVC. The artist's crisscrossing pattern leaves one to look in astonishment, especially against the white backdrop which makes it seem like the materials are simply floating in midair. The Titan tune rightly captures the tone and the mood of the TVC.

Ronnie Talati, Chief Marketing Officer, Titan Company Ltd.: Titan Edge as a brand celebrates mastery and perfection, in an endeavor to provide world-class timepieces to our customers. Edge’s latest campaign speaks about Mastery beyond belief which reflects in all the facets of the brand’s offering.