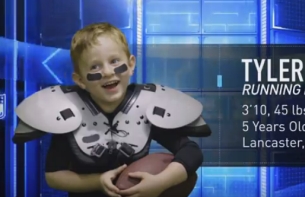 Hyundai is helping make the 2016 NFL Draft experience better for fans by allowing families to create and share their own draft videos of their kids at DraftDay2031.com, and through an engaging on-site activation in Chicago. The digital and on-the-ground campaign is the continuation of Hyundai’s #BecauseFootball marketing program that aims to improve the NFL fan experience.

“Our Draft Day 2031 digital hub is a fun way for families to engage with the draft and create personalized content of their future football stars,” said Dean Evans, chief marketing officer, Hyundai Motor America. “The goal of our NFL program is to make the fan experience better, whether that’s on TV, on social media or on-site, and we are excited to bring that to life in year two of our official NFL sponsorship.”

Hyundai has teamed up with NFL Network Draft Analyst Mike Mayock to celebrate football families and ultimately the future of the NFL in a playful and entertaining way. Draft Day 2031 is a charming mockumentary where Mike Mayock analyzes the kids who could be selected 15 years from now. It features cameos from NFL players Lawrence Timmons from the Steelers and Sam Young of the Dolphins. The mockumentary plays off the idiosyncrasies of the pro broadcaster analyzing the budding hopefuls. For instance, while Mayock remarks on the 2031 offensive prospect’s power and ability to dominate in the open space, the adorable five-year old proudly shows off his new shoes that, “help him run faster than ever.”

NFL fans can make personalized, sharable videos of their own favorite little football stars featuring analysis from Mike Mayock. Parents, friends, pee-wee football coaches, and fans are invited to visit DraftDay2031.com where they can create and share their own Draft Day 2031 video by uploading three images of their kid. A personalized video featuring signature “Mayock-isms” can be shared across various social media platforms. The Draft Day 2031 program will be supported with banner ads and pre-rolls on NFL.com, as well as a social campaign. The campaign is from Hyundai’s agency of record INNOCEAN.

The NFL will welcome the newest members to the NFL family when the NFL Draft returns to Chicago from April 28-30. This year, Hyundai is the presenting sponsor of Selection Square, part of NFL’s Draft Town, which is home to the 32 team Draft tables and the location of Rounds 4-7. Hyundai’s activation adjacent to Selection Square is an indoor/outdoor structure, featuring the opportunity for fans to create their own Draft Day 2031 video with original images taken at the Hyundai space as consumers run through Combine activities. Hyundai vehicles will be displayed in Selection Square and will also serve as Red Carpet player drop-offs. Hyundai’s on-site experiential Draft program is managed by Advantage International.