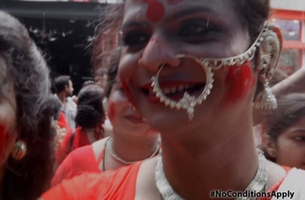 FCB India, in collaboration with Times of India, launched the second leg of #NoConditionsApply: a powerful short film that aims to change the Bengali Hindu ritual of Shindoor Khela from one of division to one of inclusion. The viral campaign, released in print and across social media platforms, is creating waves across the country, and has already surpassed one million online views.
#NoConditionsApply is based on the 400-year-old tradition of Shindoor Khela, which is carried out on the last day of Durga Puja, an annual Hindu festival celebrating the warrior goddess, Durga. During this custom, married women come together and colour one another with vibrant vermillion paint (sindur), to both mark and honour their marital status.  However, while wedded women traditionally unite in this social festival, others are forced to look on, uninvited: Among these groups are single women, divorcees and widows, as well as the gay and transgender community.
“This movement wasn't for those who had opted out. It was for those who had been pushed out. It was about erasing a line not drawn by them, but by others,” said Swati Bhattacharya, Chief Creative Officer of FCB Ulka. “Me and my other sister, my transgender sister. My widowed sister. My sex-worker sister. My outlier sister. It was about equality in symbology. Every progressive, inclusive thought is only as powerful as the ritual it permeates. At least in a country like India, where ritual is everything.”
As part of the film, Times of India joined one of the Durga Puja organizers in Kolkata to host a newly inclusive Shindoor Khela. Narrated by various unmarried women from the community, #NoConditionsApply presents the point-of-view of these onlookers, and gives them a voice for change. This new celebration embraces all women, regardless of background or social identity, to transform the long-held tradition of division into a tradition of sisterhood.
Shedding light on this theme, Rohit Ohri, Group Chairman and Chief Executive Officer of FCB India, remarked: “Swati Bhattacharya, Chief Creative Officer of FCB Ulka – and a feminist – created this campaign about social inclusion for Times of India. Inclusion cannot be conditional. And so, #NoConditionsApply was the perfect articulation to spark off this behaviour-change campaign.”
Sumeli Chatterjee, Vice President and Head of Brand TOI, also reflects on the social significance of this campaign, commenting: “#NoConditionsApply is an initiative that is close to our heart and existence. There is a lot of talk about diversity of gender; this highlights the need to have diversity even within the gender. While we have hosted this inclusive Shindoor Khela initiative in Kolkata, the messaging is relevant to every occasion and every festivity. When we talk of gender equity, we cannot limit our conversations to only ambition and opportunities; we need to talk about inclusion in festivals, celebrations and every walk of life, which will allow everyone to walk that step together. No celebration can ever be complete without including one and all.”
While #NoConditionsApply specifically focuses on Shindoor Khela in Kolkata, the empowering message of togetherness is meant to resonate globally: not only for all festivals in India, but for the world at large.
“Traditions that divide us stand in the way of progress. This is true around the world. #NoConditionsApply shows that we can hold on to the human need for traditions, and yet share them with so many more. That’s progress,” said Susan Credle, Chief Creative Officer of FCB Global.
view more - Creative