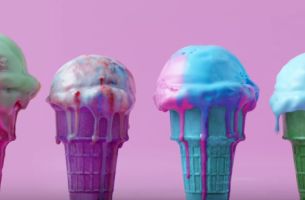 On a night celebrating authentic, real film craft, farmer-owned co-op, Tillamook, together with their brand agency 72andSunny, continued the fight for authentic, real food by exposing artificial ingredient-laced, over-processed “Big Food.”
“Big Food” is a colloquial term that many have assigned to big corporations that mass produce processed food. Some of these corporations promise “100 percent purity [in their cheese but] contained no cheese at all." Building on an emerging consumer-led war on Big Food, Tillamook and 72andSunny released a 60-second film "Goodbye Big Food, Hello Real Food” during the Oscars, positioning Tillamook as a real, honest food alternative owned and run by 90+ farmer-families, not shareholders. The spot opens in a dystopian landscape of food production, and exposes the artificial ingredients in over-processed Big Food. The Big Food world is characterized by artificial colors and flavors, weird, unnatural food science and mass production in assembly lines. This world is then abandoned for an honest, wholesome world of real food, featuring Tillamook’s real farmers and their cooperative business. The film was directed by Floria Sigismondi with editorial by Jay Rabinowitz (“Requiem For A Dream”) and Chris Kursel.
To engage fans real-time during this popular cultural moment, Tillamook and 72andSunny also released a series of real-time social videos that echo the “Goodbye Big Food, Hello Real Food” message: Popcorn, Nachos, Slushie and Ice Cream Sandwich.
Tillamook produces dairy products with simple, natural ingredients, including cheese, ice cream, yogurt, sour cream and butter, with no artificial growth hormones, no high fructose corn syrup, no artificial coloring, no artificial sweeteners and no artificial flavors. As a farmer-owned co-op with a different business model than its competitors, Tillamook is owned by people, not traded by shareholders. Tillamook and 72andSunny have opened up Tillamook’s business model to include consumers in its decision-making through the first-ever dairy community co-op 'The Tillamook Co-Op.'
“Part of the ‘Dairy Done Right’ story is showing people where food isn't done right,” said John Boiler, Founder and CEO of 72andSunny. “These films are an important chapter in Tillamook's fight for real food and we thought they deserved to be shared during a big cultural moment like The Academy Awards.”
“The values and ethics of our farmer-owners have been driving the success of the Tillamook brand and company for 107 years,” said John Russell, Tillamook’s VP of Marketing. “We believe it’s important that, at a time when people are starting to ask more and more questions about who is making their food and where it comes from, that we share these values much more loudly than we ever have in the past.”