Ticket Details for Saatchi NDS Screening in London this Thursday

Awards and Events 343 Add to collection

#FeelTheReel screens at Barbican in London on Thursday 3rd of July 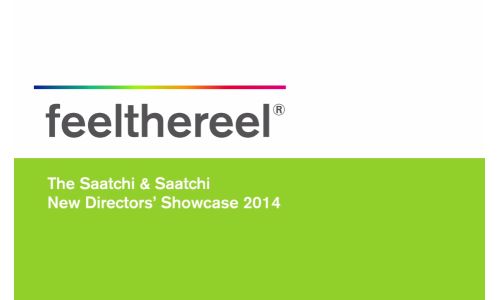 After packing the 2,300 seat Grand Auditorium at Cannes Lions International Festival of Creativity on Thursday 19th June, Saatchi & Saatchi will have a screening of their popular New Directors’ Showcase (NDS) at the Barbican in London on Thursday 3rd July at 7.30pm. You can buy the tickets here.  There will be further screenings around the world including; the Teatro dell’Arte Triennale in Milan on 2nd July; The Ace Hotel in Los Angeles on 16th July;  Brooklyn Academy of Music (BAM) in New York on 17th July; and Shanghai Center Theater in Shanghai on 21st October.

Now in its 24th edition, the annual Saatchi & Saatchi New Directors’ Showcase has carved out a reputation for acting as a barometer of who are the hot directors to watch, and provides young talent with a global platform through the NDS event in Cannes.  Saatchi & Saatchi invites submissions from directors around the worl, and its Worldwide Creative Board, with direction from Worldwide Creative Director Pablo Del Campo, watched hundreds of entries and arrived at a final selection of 19 films by 18 directors.

This year the reel features a typically eclectic mix of music videos, animated shorts, humour, erotica, surrealism and the grotesque.  Directors featured in the 2014 Showreel come from Denmark, France, Germany, Israel, Italy, Switzerland, the UK and the US.  Alumni from previous instalments of the NDS include Spike Jonze, Jonathan Glazer, Tarsem and Michel Gondry.

The screening of the 2014 NDS Showreel in the Barbican Cinema will be introduced by a short film of the live NDS ‘Feel the Reel’ event in Cannes on Thursday 19th June.  After the screening of the Showreel there will be a panel discussion co-chaired by Kate Stanners and Andy Gulliman of Saatchi & Saatchi, featuring panellists including 3 of this year’s NDS directors (Ed Morris, Alvise Avati and Kibwe Tavares), Maggie Ellis of Film London, Andrew Ruhemann of Passion, and Juliette Larthe of PRETTYBIRD.  An after-party in the Barbican Garden Room will follow the panel discussion with music provided by Audio Network.

Kate Stanners, Saatchi & Saatchi London Creative Partner commented:  "I'm delighted to be co-chairing the panel at the Saatchi & Saatchi London New Directors' Showcase event on Thursday 3rd July.  The NDS is always one of the most popular events at Cannes Lions International Festival of Creativity, and now we are bringing the reel of 19 films by 18 talented young directors to the Barbican in London.  It’s fitting that we will be showing a world-class Showreel of directorial talent in the Barbican cinema, followed by a panel discussion featuring key figures from the worlds of advertising, film, media and production."

The Showreel has been curated by Andy Gulliman, Saatchi & Saatchi Worldwide Film and Content Director who commented: “We want to be introduced to a new generation with a fresh approach and attitude.  We want to find young talent that can manage a traditional format and stand out from the crowd.  We want to give great work great exposure.”

The theme of this year’s NDS - ‘Feel the Reel’ - was conceived by Saatchi & Saatchi creatives Linda Weitgasser & Alexandra Sattlecker.  ‘Feel the Reel’ makes the Showreel the hero of the NDS this year.  Weitgasser and Sattlecker partnered with Juliette Larthe of PRETTYBIRD who brought together Studio XO, Marshmallow Laser Feast, and Berlin collective Elektropastete to create the innovative ‘Feel the Reel’ experience in Cannes.  During the Cannes NDS event the audience wore Sensory wristbands developed by Studio XO (Nancy Tilbury and Benjamin Males), which monitored their emotional engagement with the Showreel of Directors, using XOX a new wearable emotional sensor platform from the team at Studio XO.

The emotional data was captured from the wristbands and projected at the audience through data visualized by Marshmallow Laser Feast (MLF) and Electropastete on screens around the Showreel. PRETTYBIRD’s Juliette Larthe was Executive Producer of the 2014 NDS event in Cannes, and has worked on the event with Saatchi & Saatchi since 2011 when she first introduced MLF to choreograph the live shows in Cannes.  MLF have acted as Creative Directors or the NDS Cannes event since 2011.

Studio XO and MLF are featured in ‘Digital Revolution’, an immersive exhibition of Art, Design, Film, Music and Video Games at the Barbican, which runs from 3 July to 14 September:

The ‘Feel the Reel’ identity and logo were created by Farrow, and the soundscape created specially for the event was composed by Finn McNicholas.  The live show in Cannes was co-directed by Studio XO and MLF, with creative direction from Robin McNicholas and Barney Steel of MLF.  MLF computational design was by Raffael Ziegler and Max Mittermeier, with motion graphic artists Ersin Han Ersin and Mike Tombeur.