Winner of the 2003 BBC Young Composer Competition, Thomas’ music can be frequently heard on BBC Radio 3 and Classic FM 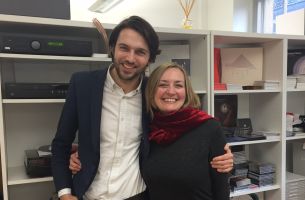 Thomas has written three ballets, which toured the UK with Ballet Cymru, most notably a dance setting of Dylan Thomas’ Under Milk Wood.  Recent large-scale works include Wildflower Meadows, a song cycle commemorating the First World War, and the Christmas cantata Incarnation, released on Regent Records.  Thomas has also composed the music for a new musical version of Rumpelstiltskin, which premiered in Bath in 2014 and transferred to Belfast in 2015. Recent performances include the UK premiere of his choral and orchestral work Panathenaia at the British Museum.

Film scores include orchestral music for a series of animated films, with stories by Michael Morpurgo and narration by Stephen Fry, which were commissioned by the London 2012 Olympics and shown throughout the year in UK cinemas.

Thomas Hewitt Jones says of the signing, “On meeting Catherine and all of her other young and vibrant team members, it became obvious that their composer management, project development and creative approach to publishing would be a perfect fit. I look forward to working together to build and promote my music for a long time to come”.

Catherine Manners, Director of Manners McDade comments, “The classical music industry has been crying out for a composer like Thomas Hewitt Jones”.

Thomas is currently working on a large-scale orchestral work, commissioned by Hugo Ticciati’s Festival O/Modernt in Stockholm as well as a new collaboration with acclaimed screenwriter Dominic Minghella.

"How refreshing to discover a living composer who dares to write music that possesses both splendid melody and well-crafted conventional harmony - and avoids being considered twee, populist or crossover"