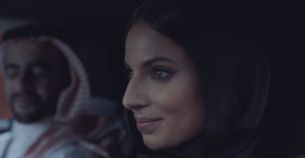 June 24th 2018 is a historical date: from this day on, women in the Kingdom of Saudi Arabia will be allowed to obtain their driver’s license and drive cars.  The Hamburg office of the agency group thjnk celebrated this event with Audi and the film "Doors".

The women of the Kingdom of Saudi Arabia are now allowed to drive themselves – and take even another step to live their role within the society with more independence.

The film "Doors" stages these new possibilities in a charming way: we see a married modern Saudi couple and experience how this new equal role applies in everyday life.

The film was directed by Nacho Gayán and produced by Stink Films Berlin.  It will go live on June 24 in the Saudi Arabia market and then be distributed worldwide. A special location where the film will be shown is the recently opened first ever cinema in the Saudi capital Riyadh.

Jörg Dietzel, Head of Global Creative and Sales Media Audi AG, explains: "With this film we welcome the women of the Kingdom of Saudi Arabia to the world of Audi. We are happy to be part of their future explorations and invite them to have lots of fun with our cars."

Armin Jochum, board member thjnk Hamburg GmbH, adds: "We are very proud to celebrate this historic moment together with our client Audi. Occasion-related communication is always very relevant, of course. Even better if the occasion is such as this."

Music Company: Not a Machine Hamburg