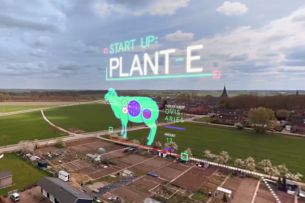 Startup Fest Europe asked 72andSunny Amsterdam & MediaMonks to help launch and demonstrate all the possibilities the Netherlands has to offer to the fast-paced Startup scene. This led to the idea of launching the event in true startup fashion: with an elevator pitch. The virtual reality elevator takes viewers on a Willy Wonka-style journey that showcases Dutch innovation in the most vital areas to safeguard the future, such as biotech and water management.

The journey introduces viewers to a range of innovative startups that are active in the rural, urban and water areas. For instance, viewers will see a company that develops a way to generate electricity from wetlands (Plant-e), or a new kind of radiator that uses the heat from a computer server to warm your house (Nerdalize), and a technology that uses temperature differences between the tropical deep sea and the shallow waters to generate electricity (Bluerise). The experience can be viewed here with a Samsung Gear VR, Cardboard viewer or as a YouTube 360 video.

MediaMonks and 72andSunny Amsterdam are strong examples of creative companies that set up shop in the Netherlands and now successfully have branched out worldwide. Both companies have gone through the fun and struggle of starting up, which is why they’re proud to support the entrepreneur community and this leading international event.

Startup Fest Europe takes place from Tuesday 24 to Saturday 28 May across different cities in the Netherlands. With a spectacular lineup of keynote speakers that includes Tim Cook (Apple), Eric Schmidt (Alphabet), Travis Kalanick (Uber) and Nathan Blecharczyk (Airbnb), Startup Fest Europe aims to be the biggest startup event the world has seen to date, placing the Netherlands at the centre of the global startup community.

Get on that elevator and see what innovation in the Netherlands has got to offer. The Elevator Pitch will be officially released during Startup Fest Europe and will subsequently be used for trade missions all over the world.