This Super Bowl Spot Features an Outraged Burrito Attacking People. And It Is Great

One of two Game Day spots for GrubHub out of Barton F. Graf 9000 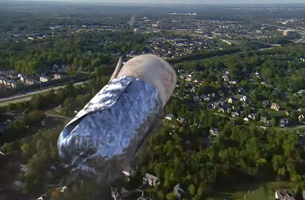 An angry burrito attacks delivery food orderers in this delightfully silly Super Bowl spot for Grubhub. Created by Barton F. Graf 9000 and directed by Biscuit's Aaron Stoller, the ad pushes home the message that it's easier to order food online (and means you don't have to talk to even one human being) with some smart slapstick comedy. Just listen to those 'urghs', 'ouches' and 'thwacks' as the rolled sandwich takes his vengeance.

It's one of two GrubHub spots to air during Sunday's Super Bowl. Burrito will air during the third quarter and its counterpart, 'Wrong Order' (which you can also see below), will be on during the pre-game show.