This 'Slave Made' Makeup Reveals the Human Price of Beauty 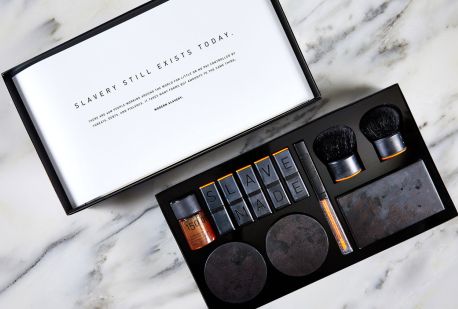 CNBC recently reported that upwards of $5 Billion will be spent on makeup products this holiday season alone.

But consumers rarely consider the human price of the makeup they buy.

Slavery is thriving today, but it’s hidden deep within supply chains of some of the most popular products on the market. The Thomson Reuters Foundation is committed to taking action against modern slavery. To do so, the brand teamed with TBWA\Chiat\Day New York to create a custom holiday set 'slave made' luxury makeup and sent them to popular beauty influencer Shameless Maya to unbox.

The film sees Maya unbox what appears to be luxury makeup. A closer inspection reveals hidden facts and statistics incorporated into the product design that expose dangerous conditions, illegal tactics, and soaring numbers of modern slaves, often children, used to mine the mica which gives makeup it’s sparkle.

- One bronzer compact displays that more than 20,000 children work in the mica mines in two Indian states alone.

- Another discloses how fewer than 10% of mica mine deaths are reported to police.

- A mirror compact reveals actual natural mica that children are often forced to mine with their bare hands.