This Skin Cancer Awareness Film Features The Spottiest of Us All. Dalmatians! 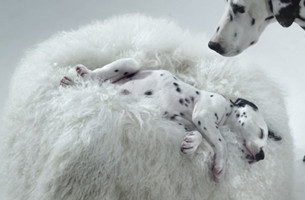 For years, public bodies and charitable organisations have been fighting to prevent skin cancer; considering the fact that the condition has a 90% recovery rate in cases where it is caught in time, early detection is a crucial factor in beating the disease.

As a result, La Roche-Posay has declared its ambition to renew interest in the issue by creating a global movement with the aim to put the general public on the front lines of cancer prevention. La Roche-Posay is well-established as an expert skincare brand, working closely with dermatologists for research and development of their products.

As part of its commitment to aid the fight against skin cancer, La Roche-Posay has lent its support to the My Skin Check programme, which raises awareness of the disease, as well as providing information and screening services in several countries. The ABCDE-method is a method for checking moles yourself, developed by dermatologists worldwide, it's a simple 5 step method and this is what La Roche-Posay wanted to raise awareness about.

La Roche-Posay's “Become a Skin Checker” is a viral awareness campaign made up of a video that leads the viewer to the Skin Checker platform, hosted on La Roche-Posay's local websites where you find the method, tests to see if your skin type is in the risk zone and related information.

The project is based on the strategic insight that: "People are more likely to worry about the health of their loved ones than their own". This comes across in a very cute way in the charming video that takes a step away from the alarming, scare type of messaging that usually surrounds the topic. Created by BETC Paris, it features Dalmatians – checking each other’s spots.

Jean-Michel Alirol (Art Director) and Dominique Marchand (Copywriter) explain the choice: "Showing naked people looking at their skin is always slightly edgy; there’s a risk that viewers may find it uncomfortable or distressing. So, it made sense to find an analogy using animals, which led us to the Dalmatians.”

The campaign first rolled out in Australia and is now being launched on local platforms in France, the UK and the US.