This 'Singing Sailor' Is Inviting Gay Russian Submarines to Sweden 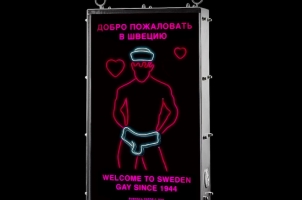 In the search for foreign submarines, the Swedish military just had their biggest mobilization for decades. But, they found nothing. Voices are heard for more resources.

It’s all hands on deck. Even for The Swedish Peace and Arbitration Society. On the 27th of April, The Singing Sailor Underwater Defense System was installed into the sea in the archipelago due east of Stockholm. The Singing Sailor is a sub surface sonar system sending out the Morse code: "This way if you are gay". For any submarines passing close by, The Singing Sailor also features the message “Welcome to Sweden. Gay since 1944” (the year Sweden legalized homosexuality) as an animated neon sign.

"If there is a submarine down there beneath the Baltic waves and the crew should happen to see or hear the Singing Sailor they are welcome to join us in the Stockholm Pride Parade on the 1st of august. In times of unrest, love and peace across boundaries is more important than ever. We want to break-up with the violence. Our invitation is also extended to Swedish subs and military personnel and all others that want to join us," says Daniel Holking, Communications-and fundraising manager with the Swedish Peace and Arbitration Society. "The Singing Sailor is also a contribution to the debate that we all should shift military resources into development and rethinking security."

"If military actions and weapons had functioned as conflict-resolution methods there would be peace in the world a long time ago" says Anna Ek, president of The Swedish Peace and Arbitration Society.

The Swedish Peace and Arbitration Society (SPAS) is the world’s oldest peace organization and three times associated with winning the Nobel Peace Prize. It is an association of people who are convinced that conflicts can be avoided through cooperation, resources and diplomacy. Military rearmament in itself is a major contributing cause of conflict.

Thinking Of Buying An Oculus Quest 2? Here’s All You Need To Know
NESCAFÉ Just Made a Coffee Table Out of Coffee Grounds
The Supply Chains Crisis Is a CX Issue - Here’s What Brands and Agencies Need to Know
It's Time to Redefine the 'Account People'