This Shocking Christmas Storefront Display Isn't What It Seems 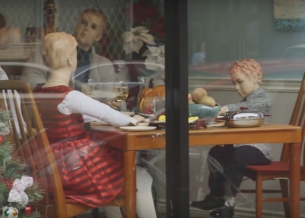 Did you know there is a 30% surge in domestic violence against women during the holidays?

On Sunday, FCB Toronto debuted a unique holiday window display, called “The Window Project,” an interactive store window that helps illuminate the horrifying realities of violence against women during the holidays, to raise awareness and generate funds for women and families impacted by this issue in Canada.

Created in partnership with two Ontario-based women’s shelter organizations “The Window Project” features a familiar Rockwellian holiday scene will be displayed with a startling twist: one in which an animatronic mannequin woman and her children are the victims of domestic violence. Instead of just being bystanders to the violence, holiday shoppers will be able to stop the violence for 60 seconds by donating $5 CAD to OAITH and Yellow Brick House via SMS.