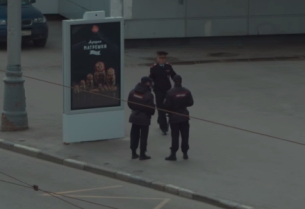 In August 2014 the Russian government banned food imports from the European Union.

Giulio Zompi, the owner of an Italian grocery shop in Moscow, inspired The 23 agency to create an extraordinary ad - one that hides from police officers.

By fiddling with an open source face tracking code, the agency managed to change it to detect Russian police uniforms. They then equipped an ordinary outdoor banner with a camera and computer, hiding an ad for Don Giulio Salumeria from incoming police officers.