This Rainbow'd Restroom Accepts All Humans at Pride Fest NYC 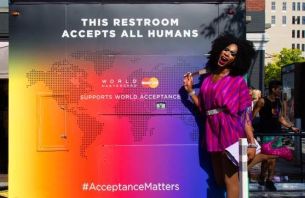 This past Sunday at the kick-off of Pride Fest in NYC, MasterCard, a long-time supporter of the LGBT community, quietly added to its #AcceptanceMatters annual parade float presence by debuting a rainbow’d first-of-its-kind restroom that accepts all humans, unlocked by simply touching the fingerprint sensor on the door to prove that you’re human.

MasterCard and its agency, McCann XBC, developed a custom API for a Bluetooth-controlled lock, combined with a pulse sensor and an Arduino Yun micro controller that wirelessly communicated with the restroom lock. The technology was complimented by a heart-shaped design celebrating the love and acceptance felt across NYC Pride. When visitors placed their hand on the sensor, LED lights lit up the heart to the rhythm of their heartbeat and wirelessly unlocked the door to the restroom.

Uprising: The Importance of a Challenge with Francisco Valenzuela