'This Must Be the Only Fantasy' for Rodarte 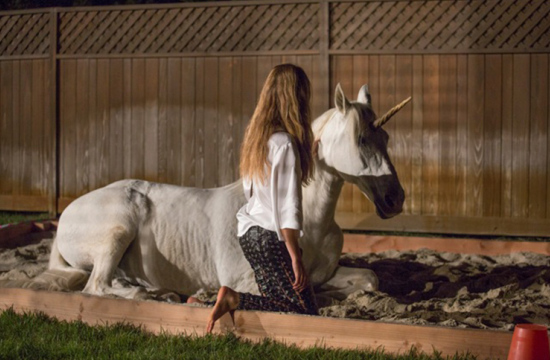 Produced by The Creators Project, “This Must Be The Only Fantasy” is a new Rodarte film, directed by Todd Cole, featuring an original score by Beach House and starring Sidney Williams with Guinevere Van Seenus and Elijah Wood.

“The film explores the eccentric world of gamers and fantasy board games,” said Todd Cole. “I wanted to create a hazy, cinematic landscape that tells a story that captures a teenage state of mind – that anything feels possible at that age. Your fantasies feel real. You can be a nerdy gamer, but with a strange turn of events, you could become a warrior princess.”

Set in present day Los Angeles, the film begins with a teenage gathering but quickly evolves into a mystical journey complete with a nefarious cloaked horseman, young hooligans who are not who they appear to be and a white unicorn.

“I wanted to avoid the campy or the kitsch that is usually associated with the fantasy genre,” adds Cole. “I wanted to place this story firmly in present day Los Angeles and include a supporting cast of very real, cool (but still nerdy) kids. The film maintains a unique balance of cinematic realism, with a fresh and contemporary take on the fantasy genre. The ultimate goal was to create something highly artistic – a beautiful 10 minute short film that seamlessly merges art, fantasy, action, music and fashion.”

Cole and Rodarte designers Kate and Laura Mulleavy conceived this new project in response to Rodarte’s acclaimed Spring Summer 2013 collection, which drew heavily from Medieval-era design cues including chain-mail armor, marquetry, and corseted silhouettes. Not only do Radarte pieces appear in the film, Kate and Laura Mulleavy were also the costume designers for all the characters.

To complete the film’s fantasy feel, visual effects were created by A52 in Santa Monica, owned by Linda Carlson and Angus Wall. Wall is director David Fincher’s editor and has recently won two Academy Awards for best editor for The Social Network and The Girl With the Dragon Tattoo.

Todd Cole also directed two previous films for “The Curve of Forgotten Things” (2011) and “Aanteni” (2010) also showcased the label’s Spring Summer collections. Those can be viewed below along with a behind-the-scenes for “This Must Be The Only Fantasy”.