This Man is Weeding His Garden Right Now. But How? 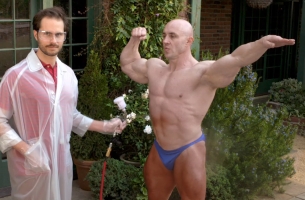 Mcgarrybowen has created a new TV commercial for Weedol Pathclear to raise the profile of the brand at the start of the gardening season.

The spot dramatises how Weedol Pathclear can keep weeds at bay for three months. It features a man who lets us know that he is still killing weeds while undertaking a series of incongruous activities that include playing table tennis, painting a picture and spray tanning a Russian bodybuilder.

Paul Jordan, ECD at mcgarrybowen said: “Weedol Pathclear was a dream brief. A weed killer that carries on killing months after spraying. It leaves gardeners free to do whatever they like. And the agency too, pretty much.”

Sheila Hill, General Manager at The Scotts Miracle-Gro Company said: “With gardening commercials, it's so easy to become overly functional and lack cut through.  With the "I’m Weeding Right Now" creative though, mcgarrybowen have created an ad which manages to communicate the brand's unique ability to keep on working; but done so by showcasing spray-tanning bodybuilders, karate practice and some spectacular oil painting.”

The ad was written by Richard Holmes and Remco Graham, it was directed by Harold Einstein at Outsider films.