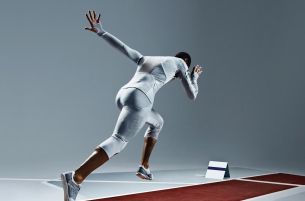 SKYN Condoms with Sid Lee have successfully transitioned their revolutionary condom material beyond the bedroom and onto the athletic track with SKYNFEEL APPAREL.

The SKYNFEEL APPAREL suit features dragonfly wing-inspired flaps located on the edge of the body, constructed from a thin layer of SKYNFEEL and reinforced by a geometric laser cut grid. Designed with the long jumper’s technique in mind, the flaps stay flat during the run, to open up with the jump — just as the athlete twists his arms and straightens his legs.

“We share the universal admiration for competitive athletes’ total commitment to what they love,” says Jeyan Heper, President & General Manager, Sexual Wellness Global Business Unit at Ansell. “Their constant search for innovative ways to gain an edge in performance inspires us. With the SKYNFEEL APPAREL prototype, we hope to inspire our customers with the thought that when you minimise the body’s limitations and maximise freedom, it’s liberating.”

“SKYN is always keen to operate at the forefront of innovation. This campaign and product are prime examples of their dedication to superior performance and how they naturally come together,” adds Kenn MacRae, Executive Creative Director for Sid Lee Amsterdam.

The SKYNFEEL APPAREL 90 second film was crafted by director and documentary filmmaker Jona Honer, and will live on SKYN’s owned channels. A TV version will go live in Brazil in late July 2016.

My Biggest Lesson: “If It Doesn’t Scare You, You’re Not Trying Hard Enough”
View all News