This Kenzo Film by Spike Jonze Is Brilliantly Bonkers 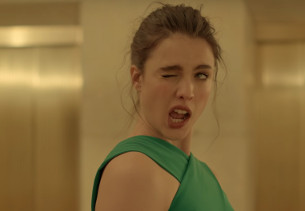 This new Kenzo ad by director Spike Jonze couldn’t be further from the stuffy, uptight dullness that our eyes are used to from perfume films.

‘My Mutant Brain’ tells the story of a character, played by actress and dancer Margaret Qualley, who escapes the boredom of a pretentious party to smash, slam, bop and slide her way around the outskirts of the venue.

“When we think about perfume campaigns, we think about a pretty girl with a bottle," Qualley says. “This clip is exactly the opposite. It's very multi-faceted and different; it takes the spectator by surprise."

Kenzo artistic directors Carol Lim and Humberto Leon, the creatives behind ‘My Mutant Brain’, add: “The Kenzo girl inhabits the present, like right now. She's not nostalgic at all. She likes movement and speed and the way things shift and slide and collide in real time. She's never blasé, always enthusiastic. She stands out from the crowd."

Ryan Heffington, who spearheaded Sia’s ‘Chandelier’ music video, was responsible for the choreography, while the track is an original piece by Jonze’s brother Sam Spiegel and the band Ape Drums.