With Hollywood on its doorstep, it’s not really a surprise… but there’s more to it than that, as LBB’s Addison Capper discovers 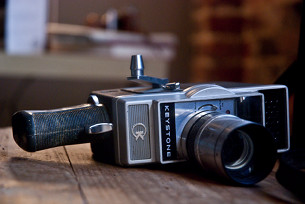 “Los Angeles is in the middle of its second Golden Age. This is the town where entertainment, marketing and technology all come together, and that gives us an edge over other markets in producing films.” Sam Baerwald, Director of Film Production, 72andSunny LA.

Los Angeles has been the centre of movie production since the start of, well, movie production. But the city has birthed a bona-fide ad industry to rival that of its eastern sibling in New York City, and said ad industry has evolved from producing print ads, to 30-second commercials and more recently – as many of you well know – to creating longer format marketing in the murky waters of ‘branded content’.

But does LA’s moviemaking heritage and know-how stand the local ad industry in better stead to produce entertaining, lengthier advertising? According to Deutsch LA Executive Producer of Video and Motion Design, Ted Markovic, the two industries were traditionally very separated. “Post houses, edit and motion graphics worked in either ad or film,” he comments. “Some of the talent worked in both industries but the businesses themselves rarely captured revenue from both, or if they did they had different divisions that handles the different industries. In today’s industry, we are starting to see more of a crossover.”

Probably the most obvious crossover between the film and ad industries in LA is the people working within them. Studios, networks, talent, unions and influencers are all on your doorstep so it makes sense to stay put if you want to work in film – whether in advertising or movies.

“In Los Angeles each industry contaminates the other in a really good way,” muses Timber co-founder and creative director Jonah Hall, who also notes the benefits of close-by talent when running a production company with a naturally small workforce. “You have to remember that production companies are, when you boil it all down, just a couple of producers and directors with phones and great list of contacts. Once a project gets going you have to get writers, actors, cameras, sandbags, cops and coffee and thrown them all together. Most of those things revolve around freelancers and vendors that spend half their time working on narrative, storyline projects. In a creative environment like Los Angeles, all of these disciplines are obviously going to influence one another.”

Knucklehead executive producer, Cathleen Kisich, enthuses that LA isn’t just the perfect environment for longer format advertising, but much more than that. “With the film industry so close, LA is better placed for all production – longer format, shorter, music video – you name it. It’s one of the only places in the world where you can truly rely on ‘movie magic’ to handle anything that might come up on set. Need a stuffed armadillo wearing a Hawaiian shirt to fly out of a cannon in two hours on location in the City of Industry? I know who to call...”

Kisich also notes that a bit of LA-centric name-dropping never hurts when pulling together a production. “Being able to tell agencies and brands that we are going to pull in the stunt coordinator from Mad Max or the DP from Black Swan into their production gets everyone so excited.”

Accessibility to big-name movie talent is also something that Luke Thornton, founder and EP of Believe Media (which also has offices in New York, London and Prague) notes as a big plus point when producing in Los Angeles. Star-studded advertising is everywhere right now – but there’s no better and easier place to produce it than LA. “Directorial talent in is much more accessible than in any other city in the world,” he comments. “A lot of movie directors who have spent their lives making long-form features are available to the ad world here through production companies. And obviously LA is the central place for agents and managers, who package the particularly talent-driven projects. Right now so many commercial pieces are star-driven and that’s generated out of Los Angeles.”

Great Guns USA’s Jonathon Ker and Annie Hanlon note changes in the way local talent agencies are operating and how production companies need to be on their toes to keep up with the game. “The entertainment industry is seeing history repeating itself. Agencies and brands are creating and developing television shows and web series to great success. Talent agencies like CAA are creating in-house departments that work directly with clients as they can package top Hollywood talent on their roster. As a production company we also look to package the right team for each project. The directors, writers, DPs and production teams we work with are also working on features and TV shows. Having that immediate access is an advantage.”

The logistical benefits of working out of LA are also something that GO managing director, Gary Rose, mentions with regards to a star-studded job his production company was billed with pulling together recently. “At GO, we recently worked on a PetSmart campaign with director Christopher Guest out of GSD&M. Since we really wanted to have top-level talent in the spots, including Jane Lynch, Anna Faris, Jennifer Coolidge, and Ed Begley Jr., and since their availability is limited, it was essential that we shoot in Los Angeles. Between the proximity to talent and the accessibility to sound stages and sets, it really didn’t make sense to shoot anywhere else.”

Being in LA doesn’t just aid in pulling a production together though. For 72andSunny director of film production, Sam Baerwald, Hollywood’s relationship with adland runs culturally much deeper than that. “One of the biggest bonuses of being based in LA is our ability to see what studios, networks, talent agencies and unions are doing in real-time. Being close to Hollywood chatter can be helpful because we learn what entertainment properties are going to be culturally relevant in a years time, three months time, or even next week.”

Los Angeles is still the entertainment capital of the world but recent tax incentives from neighbouring states are pushing some of the city’s biggest studios out of town. But is the migration of facilities leading to a migration of filmmaking talent and capabilities? Jay Lichtman, managing director of VFX house Luma, reckons the studio shifts will have a knock-on effect to the ad industry and its resources in producing longer-format work. “Aside from the few LA studios that implement a full-time staff model, Los Angeles doesn’t benefit as much as we once did from the world class talent that learned their trade when the ‘local business’ was healthier. These artists and the pipelines that they operated in understood the demands of longer format content better than traditionally trained commercial VFX artists,” he believes.

Despite the migration of many of Los Angeles’ big movie studios, much of the city’s film talent is actually staying put in the city they call home – and, consequently, that talent is moving over to the city's commercial production. “A lot of people find themselves travelling great distances due to studios chasing tax incentives,” says Deutsch LA’s Ted Markovic. Timber’s Jonah Hall adds: “Many of them [film production folk] have jumped the fence [to commercials] because runaway film production has caused a big migration.”

Arts & Sciences’ EP and managing director, Marc Marrie, also mentions that the newly homed studios still rely on an influx of LA-based talent to bring productions to reality. “Those states [offering tax incentives] have certainly upped their production support bases but for the most part they rely on an influx of crew and a lot of times vendor help from LA. LA has such a long-standing production base that it’s really hard to compete with its depth. Having crews that are knowledgeable in crossing back and forth across these different platforms kind sets us apart from the other possibilities.”

While the Los Angeles advertising industry’s proficiency in long format content is heavily linked to Hollywood, that’s not the only factor in play. After all, it’s not as if other ad centres around the world – particularly ones without a global movie business on their doorstep – are necessarily lagging behind LA in producing this kind of work. There are however other things in play in LA that are ramping up the quality of its lengthier advertising production.

For starters, its versatile landscape can offer all the locations you need within a short distance from each other. You can get metro scenes in Downtown LA, mountains and wilderness in Angeles National Forest, city beaches in Santa Monica and Venice, islands in Malibu and Catalina, East Coast-type scenes in Pasadena and desert settings in the Mojave. In addition to that, the city is literally set up to support the production environment – banks, insurance companies and even Starbucks – whose branch near the Sunset-Gower stages opens at 4 am – are all accommodating of the industry.

And for Shannon Pruitt, President of The Story Lab, LA’s unfettered access to studios, influencers, et. al isn’t necessarily the reason for its long format prowess. “Despite this access to creators and studios, we don’t see an advantage for or against LA or NY (or anywhere in between) when it comes to the physical production of content; technology has become a great enabler. Good production isn’t bound by geography (just a good internet connection).”

Believe Media’s Luke Thornton, though, thinks the city is better served for such jobs and links it to the influx of tech companies. ‘Silicon Beach’ in LA’s Westside is now home to over 500 tech startups and big money companies such as Google, YouTube, Yahoo and Buzzfeed have offices in the area. “Giants like Apple, Microsoft, Facebook and Google don’t necessarily use agencies anymore because they’ve set up their own in-house content divisions,” comments Luke. “Most of the content that is executed is digital, along with broadcast content, but for the most part it isn’t beholden to the boundaries of a 30 or 60-second spot. So the tech companies here on the West Coast are better placed to make long-form content because they have no restrictions, whereas agencies still have traditional media.”

Jonathon Ker and Annie Hanlon of Great Guns USA – who have directors working across multiple mediums, from films to commercials – are also excited by the prospects of Silicon Beach. “That’s exciting to us as it opens up emerging avenues right here in our neighbourhood… But regardless of the medium, it always comes down to doing great work. Take the creative opportunity and make it great. That will bring more work and more clients,” they conclude.

And ultimately, that’s conclusive around the world. “We have all seen brilliant film work from all over the world,” says 72andSunny’s Sam Baerwald. “Europe, Asia, Africa, India and South America have fantastic filmmakers, writers and talent that are just as good or sometimes better than North America. I love seeing the diversity in filmmaking all over the world. Creativity, which we know is global, is the real key to creating film magic. But living in the capital of film makes it that much easier.”