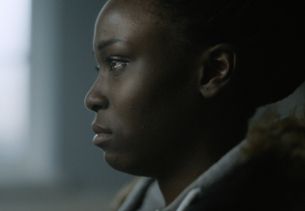 To mark Asylum Aid’s new fundraising campaign, ‘The Interview’ directed by David Edwards, is being shown in DCM cinemas around the UK, highlighting the vital role Asylum Aid plays in ensuring the most vulnerable and excluded refugees are treated fairly and protected from harm.

The film, produced by Rattling Stick, dramatically exposes what happens when people seeking asylum experience the application process. The interview seen in the film, which is based on real transcripts from vulnerable refugees which Asylum Aid has supported, shows questions asked to an unrepresented female refugee, Nina.

The idea is to provoke the feeling of what it’s like to be put through the application process, while showing the need for Asylum Aid to continue their crucial work.

Having legal representation, often funded by legal aid, means refugees do not have to go through their asylum interview alone, facing potentially unfair and intrusive questions.

The advert will run throughout March in DCM cinemas, and will be supported by a high profile PR campaign and social media outreach.

Director David Edwards comments: “As soon as I read the scripts from the agency I wanted to be involved in the project. At the time there was so much controversy in the press surrounding asylum seekers and it felt like this film could play a small part in balancing people’s misconceptions of their plight. These are vulnerable people that need help. There will always be those that abuse the system, but the majority are honest people that have suffered unimaginable hardship and injustice that need to be given a chance for a better life.

"What gives this film its power is an amazing performance by Diany Samba-Bandza. From the moment I first met her in castings she delivered a raw and emotional performance that felt utterly genuine and honest. More amazing was that each time she repeated her performance it never lost it’s impact - she nailed it every time.

"It was a project that was a privilege to be involved with and my sincere hope is that it stops and makes people think about the real hardships that asylum seekers face and that in many case it really is a life and death situation.”