This Funk-tastic Vodafone Spot Proves Not Everything Should Be Mobile 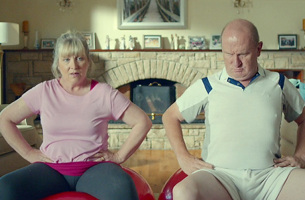 The campaign revolves around the line ‘not everything should be mobile’ and focuses around the things you can (or should) only do at home. It comprises of a 40’ brand television commercial – placing Vodafone firmly at the centre of the home – a series of 10’ ‘teaser’ TVCs and out-of-home activity. Two additional 20’ TVCs highlighting the customer benefits of the package and a press campaign run from 25 August.

The 40’ TVC celebrates home as the one place where you can feel truly relaxed; surrounded by the people you are so comfortable with that you can truly be yourself. Against the backdrop of some 1970s-esque funk, the viewer is treated to a determined-looking husband and his somewhat more bemused-looking wife. The middle-aged couple are seen working out using only some exercise balls, a spandex-laden fitness DVD…and their own unique moves. All in the comfort of their own home – which is where such moves should probably stay.

The spot was created by Tom Chancellor and Simon Brotherson, and directed by Neil Harris through Smuggler.

Vicki Maguire, deputy ECD, Grey London, says: “A home service is a big challenge for a brand that has built all its equity in mobile. We needed to announce, loud and proud, that Vodafone is with you at home, as well as when you’re out and about – hence ‘not everything should be mobile’: a brave claim for a brand which is famous for being just that.”

Sarah Hughes, Brand and Communications Manager, Vodafone Ireland, says: “Through this campaign we want to tell consumers that Vodafone is a whole lot more than mobile.  We offer a nationwide, reliable, fibre broadband solution too.  Our new plans aim to give customers added value, freedom of usage and no shocks when it comes to their monthly bill. From Simply Broadband offering unlimited fibre broadband with a landline, to our Worry Free family plan including unlimited broadband and unlimited landline calls no need for, even to mobile.  There’s something for everyone.”

Vodafone Home’s new portfolio launched in July 2014. It offers unlimited broadband and unlimited landline calls, even to mobiles. It’s the first and only plan of its kind in Ireland, and essentially means that Vodafone Home customers no longer have to worry about the dreaded ‘bill shock’ at the end of the month. Customers can use their landline and broadband as much as they like – whether that’s streaming movies to watch all night, spending hours on the phone to your best friend or video calling your relative at Christmas.