This Film Will Make You Feel Sorry for Skeletons... No, Really

Gentleman Scholar on The Trials and Tribulations of Being a Skeleton 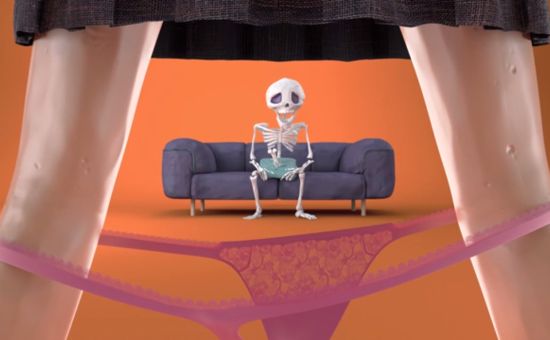 Here’s a thought to cheer you up – no matter how annoying or hard life seems, it would be 10 times worse if you were a skeleton. Production company and Halloween aficionados (if you don’t believe us, check out their Instagram) Gentleman Scholar have been busy bringing the plight of the poor old skeleton to life with a rather lovely animation. LBB’s Laura Swinton spoke to the crew about how they learned to empathise with the most classic of Halloween monsters.

LBB> Is Halloween a big deal for Gentleman Scholar? What else have you got planned for the scariest festival season?

GS> Halloween is a huge deal for Gentleman Scholar. We tend to go all out on attempts to scare one another with different kinds of pranks, scary dolls, and costumes littered around the office. It never really stops though, Halloween just gives us a little more wiggle room with how upset everyone gets.

LBB> Why did you decide to look at the stresses of being a skeleton over all the other classic Halloween monsters?

GS> The skeleton has always seemed the most underappreciated monster of them all. He tends to always pop up in some fashion, but is always more of an extra than a main event. We loved the idea that he is this sad sap that experiences the worst luck, and embodying this character with this type of personality made us laugh.

LBB> I love the sketches on the site of the different character designs for the Skeleton - what were your influences for the look of the skeleton? And how did you decide on the look you wanted to go with?

GS> We knew that we wanted to make something that was a bit goofy and humorous. As we started to sketch out the skeleton there were certain characteristics we wanted to simplify. We love what Aardman has done with their character design over the years, and really thought about the emotion and what was the lowest common denominator to give the character personality. That's really how we got to the overall sketch design, and once we arrived there we started to sort out what was the best technique for production.

LBB> I love how you've created a very tactile, real looking animation in 3D - it's got an almost stop motion vibe to it. How did you create the animation?

GS> This was definitely a careful choice for us. For one, it's something we have always wanted to use as a medium, and also knew it was the best way to take a simple idea and bring it to life. The little touches in the textures and claymation-esque renders relied so heavily on the team to detail out every piece as if we built every facet with our hands. In the end we tried to keep everything a little fast and loose, allowing the animation to be simple and grounded in reality. The craftiness of this tactility was important to us and we were happy it shined through.

LBB> What was the biggest challenge involved in creating the project?

GS> Always a good question, but this one for us was definitely the concept phase. As we sat around the table throwing out jokes and funny thoughts we had to ultimately whittle it all down. So many ideas hit the cutting room floor that would have been equally hilarious if brought to life. What we really tried to do is tread the line of what not only makes us laugh, but what we thought could work in a string of evolving moments.

LBB> He's a great hapless, everyguy kind of skeleton that I think people can relate to - can you foresee him returning in any other projects?

GS> Haha, we love that. We're always working on internal projects inside the office, so there's absolutely a chance we see him again. Maybe we can give the guy a break next time.

Title: ‘The Trials and Tribulations of Being a Skeleton’