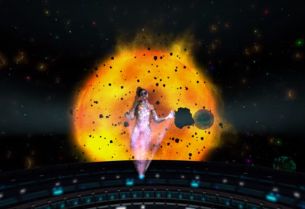 Inspired by the 2D music video for “Not Above That,” which features space-age imagery and futuristic costumes and makeup, directors DJ Turner and Monty Marsh set about creating this world in 3D for an artist who has always sought to be on the cutting-edge of technology and pop culture.

“I was inspired by the source material from the framed music video shoot for ‘Not Above That,’” says Turner. “Monty gave us access to the shoot, and with those assets, we started world building.”

The result was a high-tech virtual reality experience where viewers travel in a spaceship throughout the outer dimensions of the galaxy, encountering an overwhelming number of twinkling stars, unknown planets, fireballs, vortexes, black holes, wormholes and asteroid fields, at one point even navigating the terrain of an otherworldly planet. As the viewer is immersed in this visually stunning universe, a holographic Dawn sings in front of the spaceship’s dashboard, eventually joining in with the other dancers on the spaceship to perform an intergalactic show.

“Working with Dawn was awesome,” says VR Playhouse co-founder and CEO Christina Heller. “I love that she is an independent artist who built her own following. Her work is very tech-forward and futuristic, so it seemed like a good match.”

Director Turner agrees that VR was the perfect medium for this particular project. “Every art form that has been created over the years – music, art, computer graphics, filmmaking – they all play a role in this world of virtual reality,” says Turner. “CG artists have always created these amazing little worlds, but you only get to view them through a tiny window. Now with VR, you actually get to be immersed in them. It’s exciting to see what the future holds.”

The effects were created by VR Playhouse. Most of the assets were created in Houdini. Modeling was done in Maya, and the spaceship from the framed music video was edited in Maya. The team next took the assets into Nuke, where they performed cleanup, created light effects, composited all the different layers together and added in the hologram layers. Finally, the project was completed in Premiere.